Ant-Man, Hyundai vehicles to the rescue

Ant-Man, Hyundai vehicles to the rescue 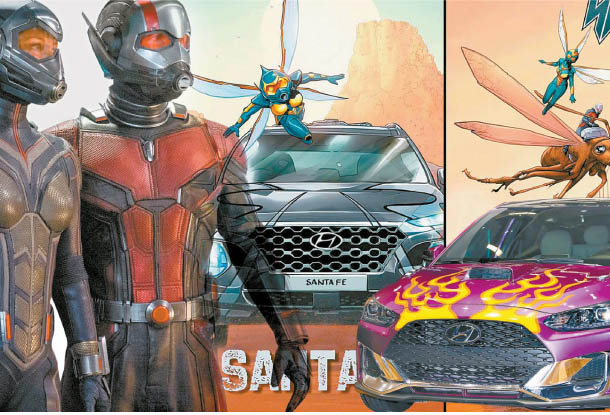 In Marvel’s latest superhero flick “Ant-Man and the Wasp,” Hyundai Motor’s three models including the Santa Fe, left, and the Veloster are product placements. [HYUNDAI MOTOR]

It’s not a proper action film if there aren’t white-knuckled car races in which the good guy pursues the bad - or vice versa.

In Marvel Studio’s latest superhero flick “Ant-Man and the Wasp,” it is none other than Hyundai Motor vehicles that provide the action.

And just like how Ant-Man can change his size, so can his cars.

Ant-Man’s friend Louis takes a tiny purple Veloster model sprinkled with yellow paint and throws it on the road to turn a once ant-sized car become a life-sized one.

With the purple-yellow coupe, Louis races down San Francisco’s curvy Lombard Street and along Harbor Bay. It is one of the most thrilling scenes in the film.

This is the first time that Hyundai Motor vehicles played a major role in a Marvel film.

Collaboration with the global film studio began when Hyundai Motor manufactured an Iron Man version of its small Kona SUV last year for marketing purposes and the partnership grew, according to the car company.

“Product placements of Hyundai Motor cars in Hollywood films have happened numerous times before, but they were all for films where the car was just a means of transportation,” said a Hyundai Motor official.

“It is different with Ant-Man because, this time, people remember that Hyundai Motor cars appeared in the film, which means the cars were more than just a means of transportation but intervened actively in the plot,” the official added.

“Ant-Man and the Wasp” is slated for release in more than 57 countries. The film, which hit Korean theaters July 6, went to No. 1 at the box office.

“Unlike smartphones or TVs that are seen in films through product placements, cars are on screen for a longer amount of time and their role in movies is more important than digital gadgets,” said Lim Joon-hyung from Hyundai Motor’s global marketing team.

“They are deeply rooted in the film’s plot, boosting the advertisement effect.”

Hyundai Motor’s Veloster is a car which is marketed for its racing functions, which the scene in the film emphasizes.

In the smash TV series “Descendants of the Sun,” Hyundai Motor marketed its new Tucson through a product placement. That helped the automaker advertise its midsize SUV in China and Middle East, where the drama was shown.

“The car was part of the story, so when the drama got exported, our car earned the benefit of doing global marketing,” said Lee Chul-min from Hyundai Motor’s domestic marketing team.

It is not possible to measure the effectiveness of product placements in films or TV series. But the company knows it works.

“When Song Joong-ki [the protagonist of “Descendants of the Sun”] appeared in a scene driving the Tucson, consumers called Hyundai Motor dealerships the next day to make inquiries about the car,” said Lee.

The process of collaboration with a global movie was unique.

According to Hyundai Motor, the Marvel team and the auto company held their first meeting in a hotel suite in the United States under tight security. Due to a tight production schedule, Hyundai Motor was asked to send the new Santa Fe and Veloster to the U.S. state of Georgia within six weeks - when the safety tests on the models weren’t even completed. The automaker said it had to take apart a few vehicles being tested in its Namyang R&D center in Gyeonggi to make one complete car to send to the filmmakers.

The importance of product placements for car companies is growing.

For Hyundai Motor, the cost of product placements accounted for only 1 percent of its advertisement budget five years ago. Now its share has expanded to 5 percent.

Lexus placed its LC500 in Marvel’s “Black Panther” to emphasize its young and sporty image. Mercedes-Benz has been placing its SUV lineup in the “Jurassic Park” series, including the premiere of the M-Class back in 1997. The “Mission Impossible” series has used sports cars like the Audi TT and BMW i8 Concept as well.