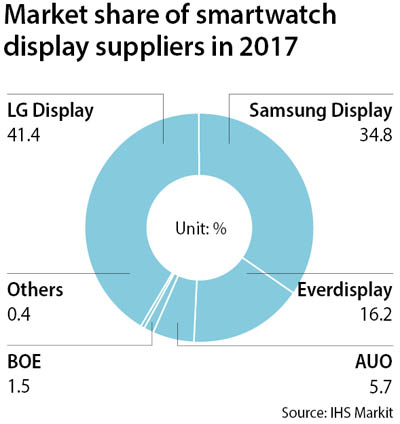 LG Display outpaced Samsung Display to become the top player in panels for smartwatches last year, according to a market report released Monday.

LG’s rise to the top was likely driven by its supply for Apple Watches last year, though neither company has confirmed the deal because of a nondisclosure contract. Analysts believe LG Display supplied over 70 percent of all Amoled panels for Apple Watches at 14.75 million units last year.

Apple Watch commanded the largest share of the wearables market in the last quarter of 2017. It made up 21 percent, according to market researcher IDC, while Fitbit took up 16 percent. Smaller producers such as Samsung and Huawei trailed behind.

Apple’s success is largely attributable to the Watch Series 3 released in September, which added cellular connection allowing users to make phone calls directly from the watch.

LG Display has been suffering from operating losses for the past two consecutive quarters and will likely report a loss again in the second quarter. The company was relatively late in tackling the industry-wide transition from liquid crystal displays (LCD) to OLEDs.

An oversupply of LCDs by Chinese companies has led to panel prices plunging, a fatal blow for LG Display since 90 percent of its revenue comes from LCDs. Panel prices fell by more than 10 percent for 32-inch LCD televisions, and prices for LCD panels between 50 inches and 55 inches fell 5 percent this year. In the meantime, major smartphone vendors including Samsung Electronics and Apple are increasingly opting for OLEDs.

“OLEDs are the only alternative for LG Display [to improve earnings] but increased costs from research and development and depreciation will continue weighing down on the company for the next couple of years,” said Kim Yang-jae, an analyst at KTB Investment and Securities.

Still, there is speculation Apple will choose LG Display as a second supplier of displays after Samsung, which would be a boon for the LG Electronics subsidiary.

Samsung has been using Amoled for all of its premium smart devices since last year, and Apple introduced a flexible Amoled for the first time in its iPhone X last year.

Ming-Chi Kuo, an analyst at KGI Securities renowned for a good track record of reporting on Apple, said that Apple is expected to launch three new iPhone models this year, and two of them - a 5.8-inch second-generation iPhone X and 6.5-inch iPhone X Plus - will sport OLED displays.

Other analysts project that all three models will adopt OLEDs. Apple already struggled with the launch of the iPhone X, which was delayed because of a lack of adequate OLED screens. The delay cut into the company’s holiday sales.