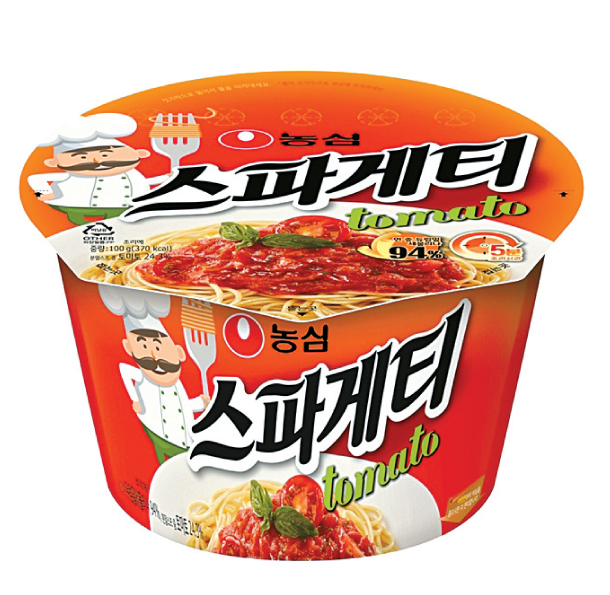 Spaghetti Tomato is a cup noodle. While cup noodles use noodles that are deep-fried, Nongshim’s Spaghetti Tomato’s noodles are wind-dried. The noodles are made of durum wheat imported from Europe - the same ingredient used to make fresh pasta. Each cup, priced at 1,600 won ($1.44), comes with powder for tomato sauce and a sachet of olive oil.

“Spaghetti takes roughly 10 minutes to cook - our goal was to reduce that time to five minutes,” said Kim Jong-joon, Nongshim’s senior vice president for marketing, at a press event held Monday in central Seoul. “Our focus was to catch and reenact the key points of the dish and add a reinterpretation of our own.”

Kim cited Nongshim’s steady-seller Chapagetti as a similar product that worked with consumers. It is an instant version of jjajangmyeon, or black bean paste noodles. Chapagetti cannot completely match a decent jajangmyeon sold at Chinese restaurants, but it gained a fan base and created a food category of its own that spurred imitations.

For Nongshim, instant spaghetti is a step into the home meal replacement market. Instant ramyeon is generally considered too light to be called a decent meal. But premium instant noodles that are closer to the original dish like spaghetti or udon have increased in the last few years.

The instant ramyeon market was sluggish last year, as the top four ramyeon manufacturers collectively saw sales decline by 2.4 percent year on year. A major contributor to that fall was the rise of home meal replacements. Spaghetti Tomato is Nongshim’s way of reviving the ramyeon market.

“The aim is to double revenue from dried noodles to 100 billion won by 2020,” said a Nongshim spokesman.