Success depends on having one great idea

Success depends on having one great idea 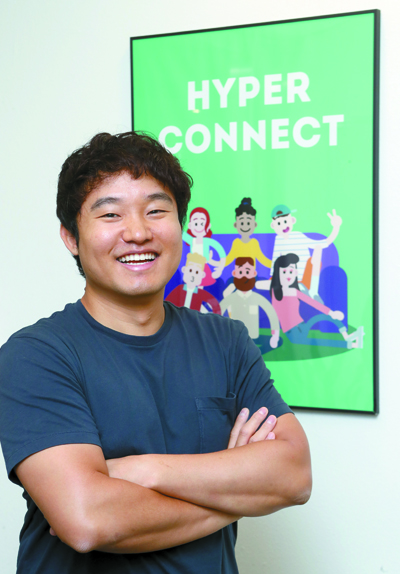 Ahn Sang-il, CEO of Hyperconnect and the creator of Azar, smiles at the company’s office in southern Seoul. [CHOI JEONG-DONG]

There are few Korean IT services that have succeeded with overseas users, with the exception of online games and Line, a mobile messenger from Naver.

One more is video chat app Azar, created by Korean engineers. Azar, which launched in late 2013, has been downloaded by 200 million people in 230 countries. Its active users number 100 million and more than 60 million video chat sessions take place over Azar every day in 19 languages.

It’s a cross between Tinder and FaceTime: video calls with strangers.

When users input their interests, an AI automatically connects them on video with potential friends across the globe. Users can choose a person they like by swiping right on the screen.

Users who want to narrow their search for friends to a country or language must subscribe to paid services, such as a 9,900 won ($8.90) per week plan. With this business model, Azar ranked ninth in sales of non-game apps in Google’s app market last year. Some 95 percent of the 62.4 billion won it made in sales last year were earned overseas.

Ahn Sang-il, CEO of Hyperconnect and the creator of Azar, is 37 years old, but has been an entrepreneur since he was twenty. Hyperconnect, his eighth company, is an embodiment of his aims to connect and entertain people beyond the constraints of time and space.

Five years ago, Ahn met with Hyperconnect’s current Chief Technology Officer Jung Kang-sik, a friend from Seoul National University’s Student Ventures Club, and current chief security officer Yong Hyun-taek, an alumnus of the Pohang University of Science and Technology, to brainstorm a video-based global service. Ahn had been working hard to pay back hundreds of millions of won in debt after the failure of his search engine technology firm Rebi Search, which he started while studying materials science and engineering at Seoul National University.

When Chang Byung-gyu, current chairman of the Presidential Committee on the Fourth Industrial Revolution, chairman of Bluehole Studio, and Ahn’s former boss in Neowiz, founded the search engine technology company FirstSnow and sold it to Naver, Ahn was also inspired to develop a new search engine.

The result was a failure; investment could not be raised after the 2008 financial crisis. But Ahn never gave up his dream of becoming an entrepreneur after reading a book written by Son Jeong-ui, founder of SoftBank, as a high school student.

“After losing big with Rebi Search, I decided that I had to start a business that would be lucrative from the beginning,” Ahn said. So he turned to video, and with his partners, refined ideas and studied technology. “We developed Azar because we were the first in the world to develop a WebRTC, a real-time video communication technology that was cutting edge at the time, on a mobile platform, and we wanted to show it off to the global market,” said Ahn.

“Making a video call with someone you know on your iPhone is nothing new, but if people who didn’t know each other could video chat no matter where they lived in the world or what languages they spoke, we figured it would be a good way to show our technological strengths,” said Ahn.

Once the team overcame technological barriers, the global market was theirs. Azar became popular in some unexpected areas: user numbers have increased rapidly in areas like Taiwan, Turkey, Saudi Arabia and others.

“I knew Azar was a success after seeing more than 200,000 people on an app that had targeted 10,000,” said Ahn. From the beginning, the app’s business model was to make users pay for additional settings and Hyperconnect saw a profit from the first month of Azar’s launch.

“We made 2.3 million won in the first month of the service,” Ahn said, “and we used that as seed capital for marketing and service fees.” Hyperconnect’s annual sales have shown more than 3,000 percent growth over the past four years.

Azar’s success is very Korean, Ahn said. “If we were living in the U.S., would an app like Azar be interesting or entertaining?” he asked. “Most of the world’s population are people who live in areas with little opportunity for foreign exchange with other countries, and have never flown on a plane in their lives. Our video call app allows these people to see the world through a new window.” The Middle East embraced Azar in particular because it is a region that culturally prefers voice over text messages, and face-to-face or video communication over voice.

Once the app took off, Ahn focused on studying the culture and languages of the Middle East to localize the app. He also studied other regions where Azar had surging popularity such as South America, Southeast Asia, and India. “I traveled around Korean language academies for foreigners throughout Korea, and I posted job opportunity posters to select employees from local countries,” Ahn said. Currently, 20 percent of Hyperconnect’s 180 or so employees are foreigners from 16 countries.

Ahn credits Azar’s success to its technology and creativity. He also wants to spread Hyperconnect’s success model to Korean start-ups. “It’s not enough to simply improve what others are already doing,” Ahn said. “It’s important that you be the first to create an experience, a service that is creative and didn’t exist before. I’m trying to continue creating new and crazy things.” To this end, he created Hyper-X, a team that attempts all the crazy projects it desires, in early 2017. It is similar to Google X, Google’s team for developing future technologies.

“When we share ideas in Hyper-X, we think about whether each idea is crazy enough,” he said, “We are already testing market responses by launching services such as AI and social networking services in certain regions of the world.” Among these projects is the AI camera application Picai.

He plans to aggressively invest in and collaborate with domestic startups to share his experiences in overseas business and success strategies. “Based on lessons we as Korean engineers learned from making a global service app, we want to create a successful path for other Korean start-ups to enter global markets.”