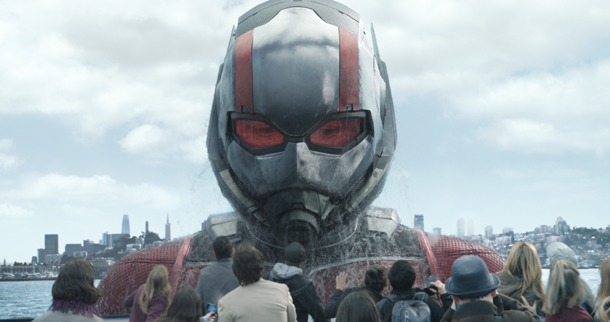 Actor Paul Rudd in a scene from “Ant-Man and the Wasp.” [AP/YONHAP]

The latest superhero sequel was seen by 1.91 million people from Friday to Sunday, generating 17.32 billion won ($15.5 million), according to the box office tally from the Korean Film Council. The film has sold 2.6 million tickets since it opened on Wednesday.

In North America, “Ant-Man and the Wasp’’ opened with typical Marvel might at the box office, and made an estimated $76 million in ticket sales.

According to studio estimates Sunday, the “Ant-Man” sequel easily surpassed the $57 million debut of the 2015 original in North America. The 20th film in the Marvel Cinematic Universe - and the 20th to debut no. 1 at the box office - “Ant-Man and the Wasp’’ comes on the heels of two mammoth Marvel successes this year: “Black Panther’’ and “Avengers: Infinity War.”

While the first “Ant-Man,’’ starring Paul Rudd, had a rocky road to release due to a late director change, the rollout of the sequel, directed by Peyton Reed, was smoother. Cathleen Taff, head of distribution for Disney, credited a marketing campaign that played up the film as a more modest, funny and light-hearted change-of-pace for Marvel following the grandiosity of “Infinity War.’’

“It came in solidly within of our range and definitely sized-up the sequel,’’ said Taff.

“Ant-Man and the Wasp,’’ with a reported production budget of about $160 million, may have performed well enough to firmly establish its place among Marvel’s more main-line superheroes. Reviews were good (86 percent fresh on Rotten Tomatoes) and audiences gave it an A-minus CinemaScore. Ticket sales overseas added another $85 million.

In Korea, local supernatural thriller “The Witch: Part 1. The Subversion” fell to second with 451,113 tickets sold.

Starring rookie actress Kim Da-mi and directed by Park Hoon-jung, the movie tells the story of a girl who is raised by an older couple after losing her memory but regains her power and memory in the process of being chased by a mysterious group of people with supernatural powers.

Director Lee Joon-ik’s latest “Sunset in My Hometown” debuted at No. 3 with 179,787 tickets sold.

The drama, which stars Park Jung-min and Kim Go-eun, tells the story of an unpopular rapper going back to his hometown to be faced with childhood memories that he wanted to erase.

“Accidental Detective 2: In Action” slipped to fourth from last week’s spot at No. 2, drawing 93,549 cinemagoers in its fourth weekend at the box office. But the cumulative ticket sales for the crime comedy starring Kwon Sang-woo, Sung Dong-il and Lee Kwang-soo reached 3,061,041.

In North America, befitting the summer season, the weekend’s top five films were all sequels. The weekend’s other new wide release was Blumhouse Productions’ “The First Purge,’’ the fourth film in the low-budget horror franchise about an annual 12-hour period of lawlessness. With July 4th falling on a Wednesday and thus depriving Hollywood of a holiday weekend, Universal opted to release “The First Purge’’ on Wednesday, while “Ant-Man’’ waited for the customary Thursday night previews.

“The First Purge’’ debuted with $32 million over the five-day frame, and $18.5 million for the weekend. Particularly following 2016’s “The Purge: Election Year,’’ the franchise has made satirical jabs at social commentary. “First Purge,’’ a Staten Island-set prequel, focuses on the ritual’s origins as a method of culling minorities.

“Blumhouse just continues to overdeliver for us,’’ said Jim Orr, distribution chief for Blumhouse’s distribution partner, Universal. “The Purge franchise continually comments on issues that are current in society, obviously through a kind of dark and distorted lens. Tying it to the July Fourth holiday made a lot of sense.’’

The films that trailed “Ant-Man’’ hit their own milestones. Disney’s “Incredibles 2’’ passed “Finding Dory’’ to become Pixar’s top-grossing film domestically, not accounting for inflation. It earned $29 million in its fourth weekend, bringing its domestic total to $504 million and its worldwide haul to $773 million.

With $28.6 million in its third weekend, Universal’s “Jurassic World: Fallen Kingdom’’ crossed $1 billion worldwide. It’s done especially well internationally, which has made up 69 percent of the dinosaur sequel’s global footprint.

As a clear alternative to the multiplex offerings, the “Mister Rogers’’ documentary “Won’t You Be My Neighbor’’ continued to perform as an art-house sensation. Ranking ninth for the weekend (in between “Tag’’ and “Deadpool 2’’), the Focus Features release earned $2.6 million in 893 theaters over the weekend.