Feud over committees continues in Assembly

Feud over committees continues in Assembly 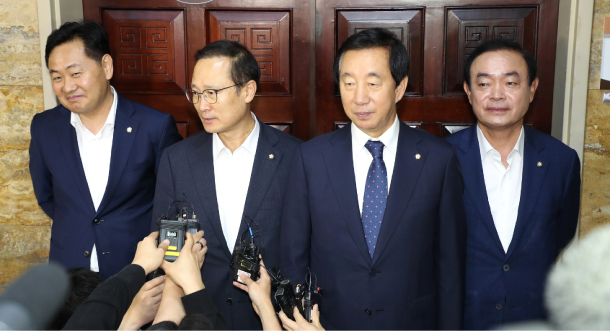 The floor leaders of four political parties walk out of a conference room in the National Assembly on Monday after they failed to reach an agreement on the formation of committees for the second half of the legislative term. [YONHAP]

Lawmakers failed to reach an agreement over committee assignments in the National Assembly on Monday, dashing hopes of an end to months of legislative gridlock.

The floor leaders of different parties met earlier in the day to conclude negotiations over the formation of 18 committees for the second half of the 20th National Assembly’s four-year term.

The parties started consultations in late June even though the former speaker’s two-year term ended in May. Opposition parties have also been grappling with a resounding defeat in local elections on June 13.

But their talks broke down mainly because both the ruling Democratic Party and main opposition Liberty Korea Party wanted to chair the Legislation and Judiciary Committee, a clearinghouse for bills.

“The parties could not wrap up talks because the ruling party would not show any compromise,” said Kim Sung-tae, the floor leader of the Liberty Korea Party. He claimed on his Facebook page that the Blue House might be behind the Democratic Party lawmakers’ stance.

The Liberty Korea Party insisted that it should lead the committee to prevent the Democratic Party from wielding excessive influence at a time when the ruling party commands 130 seats in the 300-member National Assembly.

Hong Young-pyo, the Democratic Party’s floor leader, lashed out at Kim’s claim that the Blue House ordered lawmakers to keep the Legislation and Judiciary Committee.

“The committee allocation and an improvement in the system will be discussed together,” said Kim Kwan-young, floor leader of the Bareunmirae Party. “Then I think the talks will likely gather pace.”

If the negotiations go smoothly, the Democratic Party will likely lead the House Steering Committee, in line with the tradition of allowing the ruling party’s floor leader to take the key post. The committee handles the National Assembly’s overall operations and oversight of the executive branch.

Currently, the Liberty Korea Party holds the post since the Saenuri Party, its predecessor, was the ruling party in 2016, the last time that committees were reassigned.