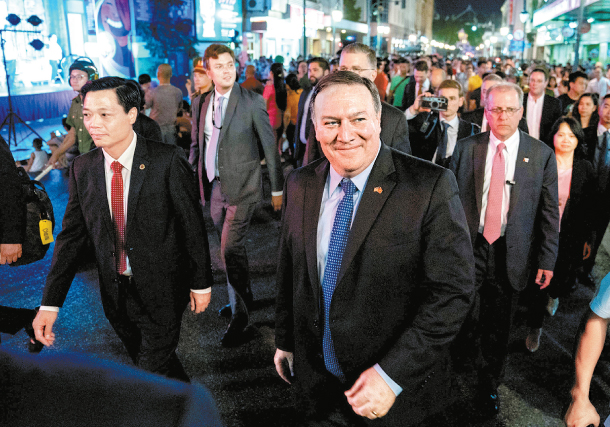 U.S. Secretary of State Mike Pompeo walks through the streets of Hanoi on Sunday. [AP/YONHAP]

U.S. Secretary of State Mike Pompeo offered North Korean leader Kim Jong-un the Vietnamese model of normalization of bilateral relations with Washington and economic prosperity, speaking in Hanoi on Sunday on the heels of a two-day trip to Pyongyang.

“In light of the once-unimaginable prosperity and partnership we have with Vietnam today, I have a message for [North Korean] Chairman Kim Jong-un,” said Pompeo at a business event at the Sofitel Metropole Hotel in Hanoi. “[U.S. President Donald] Trump believes your country can replicate this path. It’s yours if you’ll seize the moment … it can be your miracle in North Korea as well.”

Pompeo recalled overcoming the history of war between the United States and Vietnam and emphasized their current partnership and growing business and economic relationships. He credited U.S. engagement and the establishment of diplomatic relations as having a key role in catapulting the communist country into becoming the “fastest-growing economy in all of Southeast Asia,” saying he hoped the same for North Korea.

“The United States has been clear about what we seek from North Korea to set in motion this great chain of events,” said Pompeo, without directly referring to complete denuclearization. “The choice now lies with North Korea and its people. If they’re able to do this, they will be remembered, and Chairman Kim will be remembered as a hero of the Korean people.”

Pompeo held high-level meetings with officials in Pyongyang over Friday and Saturday to follow up on the June 12 summit in Singapore between North Korean leader Kim Jong-un and U.S. President Donald Trump, then flew to Tokyo Saturday to meet with the foreign ministers of South Korea and Japan on Sunday.

Despite Pyongyang’s state media rebuking the United States for its “gangster-like” demands for the North’s denuclearization, Pompeo downplayed such remarks by focusing on a rosy picture of diplomatic relations and economic prosperity.

Pompeo’s speech to business executives in Hanoi served as an allegory of what could be in store for North Korea if it follows a path of engagement with the United States through “bold resolve, despite great difficulties, to overcome the past and look forward to the future.” This marked Pompeo’s first trip to Southeast Asia since he took his post as secretary of state.

“I say all of that because it’s important,” said Pompeo. “I hope that the United States, that one day, we can share the same relationship with North Korea. We know it’s a real possibility because we see how Vietnam has traveled this remarkable path.”

Pompeo said that “one key to Vietnam’s enormous rise over the past few decades was a new engagement with the United States of America.” This began, according to Pompeo, when the United States and Vietnam “began working together to repatriate the remains of American service members lost in Vietnam” and that “this small but incredibly meaningful first step eventually helped lead to better ties and formal reestablishment of our relationship in 1995.”

North Korean leader Kim and President Trump, through their joint statement issued at their June 12 summit in Singapore, committed themselves to the recovering and repatriating of the remains of American soldiers who died in the Korean War of 1950-53. There was speculation that some remains of U.S. soldiers would be returned as an outcome of Pompeo’s third Pyongyang trip. However, that didn’t happen and Pompeo did not meet leader Kim during his visit.

“This is the same issue that the United States faces today with Chairman Kim,” said Pompeo, who added that “new ties with America, combined with the industriousness of the Vietnamese people and sound leadership, has made Vietnam an incredible success story today.”

The establishment of formal diplomatic relations between North Korea and the United States has been seen as one of the steps Washington can take toward assuring regime security to Kim Jong-un, one of the issues addressed in the June 12 statement.

In a press conference in Tokyo on Sunday, Pompeo outlined three parts in the Singapore agreement: “There were the establishment of peaceful relations between the countries, increased security assurances to North Korea and its people and, finally, denuclearization. Each of those needs to be conducted in parallel.”

Pompeo for the first time clarified that efforts toward the establishment of peaceful relations and security assurances need to come“simultaneously,” rather than as a concession or reward for North Korea’s denuclearization.

But he said that economic sanctions on North Korea will continue to be enforced until there is complete denuclearization, calling them “a different kettle of fish altogether.”

FFVD is a term that was raised days before Pompeo’s Pyongyang visit and has been thought to be softer than CVID.