Despite not being selected to represent Korea in baseball at the 2018 Asian Games, the KT Wiz’s Ko Young-pyo and Nexen Heroes’ Choi Won-tae are pitching better than ever in the KBO. 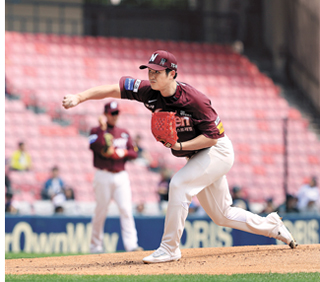 Choi Won-tae of the Nexen Heroes throws a pitch during a game against the Doosan Bears at Jamsil Baseball Stadium in southern Seoul on May 13. [YONHAP]

Choi’s exclusion from the national team came as a surprise to many as the young pitcher picked up 11 wins during the 2017 season. This season, Choi was once again added to the Heroes’ starting rotation and picked up six wins right before the announcement of the final entry. Sun Dong-yol, the manager of the Korean national baseball team, called up Lee Yong-chan of the Doosan Bears and Im Chan-kyu of the LG Twins instead.

Though Ko didn’t get off to the best start this season, he was also considered a strong contender for a national team spot. Ko is a sidearm pitcher who has the ability to play as both the starting pitcher and in the bullpen. Instead of Ko, Sun gave the spot to Im Gi-yeong of the Kia Tigers, Park Jong-hoon of the SK Wyverns and Park Chi-kuk of the Bears. The Wiz was the only team in the KBO to not have a single player on the national team.

Neither Ko nor Choi spoke publicly about their exclusion after the roster was announced on June 11, opting to let their pitching do the talking. They’ve certainly proven their worth since then - Choi has started in five games and won four. Of the five games, Choi only had one game where he gave up more than three runs. 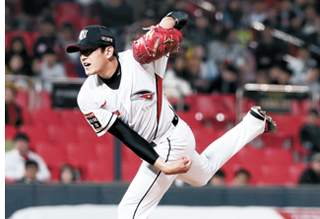 Ko Young-pyo of the KT Wiz throws a pitch during a game against the Lotte Giants at Suwon Baseball Stadium on April 26. [YONHAP]

Choi has been showing great control in his two-seam fastball and change-ups. But he has shown weakness in his curveball compared to other right handed starting pitchers. As of Tuesday’s game, Choi has picked up 10 wins this season, the most among the domestic pitchers in the league.

Ko also upped his game after the entry announcement. In the four games he has played since then, Ko has picked up two wins and a loss with a 3.75 ERA. In the 13 games Ko started in before the announcement he only had three wins and seven losses with a 4.67 ERA.

Ko has a faster tempo in his routine than other pitchers. Due to his fast tempo, the batters aren’t given much time to think and his change-ups have been improving. During the Wiz’s game against the Lotte Giants on Saturday, the Giants excluded two of their starting players - Lee Dae-ho and Min Byung-hun - from the starting lineup as they’ve been weaker against Ko.

Though both pitchers will be disappointed that they can’t play at the Asian Games, the two week break may help them return to form when the regular season resumes.

Looking at the pitchers on the Korean team, Yang Hyeon-jong of the Tigers and Cha Woo-chan of the Twins are the only ones that have previously competed at multiple international events. Since the Asian Games is held while the players are in season, it is a concern for many clubs that their young pitchers could have trouble returning to the regular rotation once the tournament is over.

Upon completion of the 2017 season, a lot of the league’s young players competed at the Asia Professional Baseball Championship (APBC) - a competition only open to young or inexperienced players.

Though the competition was held after the season, some of the young pitchers are still struggling to get back in shape. The Giants and the NC Dinos have been especially hurt by this issue, as Park Se-woong and Jang Hyun-sik still haven’t returned to form.


During the 2017 season the two pitchers showed significant improvement and locked their spots in the starting rotation. As 2017 was the longest season of their career since their debut, pitching the most innings and competing at the APBC, both pitchers felt pain in their elbow during offseason training and had to go through rehabilitation.

Due to this, they were both excluded from the season opener roster. Jang returned to the Dinos in May while Park returned in June. Since returning, Park has started in five games, picking up two losses and no wins with an ERA of 8.57. During the Giant’s game against the Wiz on Saturday, Park gave up eight runs and 11 hits in three innings.

Jang is yet to return as a starter. In the 15 games he has played in as a relief pitcher, he has picked up three wins, two losses and two saves. Jang has been the Dinos’ setup man, long reliever and a closer this season but still doesn’t have a specific role.

As of Tuesday 6 p.m. the Giants are ranked seventh while the Dinos are last. Considering the impact that the APBC had on the players, the Asian Games could spell trouble for the teams entering the final stages of the regular season, possibly even changing the postseason prospects.