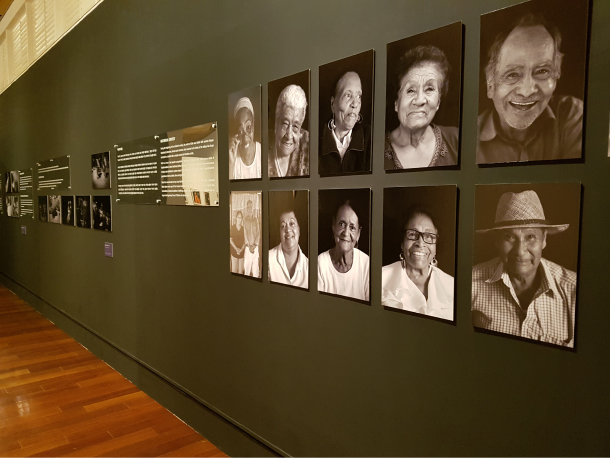 Photographs by Javier Silva Meinel show the lives of people in Peru who must make a living off of what they can from nature, with works like 밣ranha fish ?Iquitos,?far left. Photographer Christian Jamett뭩 photo series 밒ntroduction?captures the marginalized populations in Chile, right. [YOON SO-YEON]


Colombia is famous for its coffee, Chile for its nice weather, Peru for Machu Picchu and Mexico for its beautiful resorts. The four Latin American countries are known for the beauty of their natural landscapes, and tourists often visit to see how each nation’s untouched natural regions compare to their bustling cities.

At the “Land of the Pacific Embrace” exhibition held at the KF Gallery in central Seoul, however, the photographs on display do not flaunt the beauty of lush nature, nor the colorful liveliness of the countries’ urban centers.

The exhibition takes place as a part of the “2018 KF Global Bridge I — Pacific Alliance Festival Hola!” organized by the Korea Foundation, which includes performances that were held last weekend and movie screenings that will take place until July 25.

The photos, mostly in black and white, show scenes that helped shape the culture of the countries as we know them, the stories hidden behind the bright colors of the cultures. The exhibit features work from photographers that tell a different story of each country. For Colombia, Fernando Cano presents 20 images in “Country, Tribute in Black and White,” which shows the regions where coffee beans are harvested, and the wrinkled hands of the people who work there. Christian Jamett’s work highlights the faces of marginalized Chileans who are descendants of slaves.

Thirteen artists have captured different sides of life in Peru: the coexistence between Amazonian nature, the country’s urban development and the people who must live in the middle of the purity and pollution.

Also on display is what are called codices, ancient recordings of Mexican culture that are fundamental in understanding the histories of the region.

The exhibition will take place until Aug. 17. Admission is free.