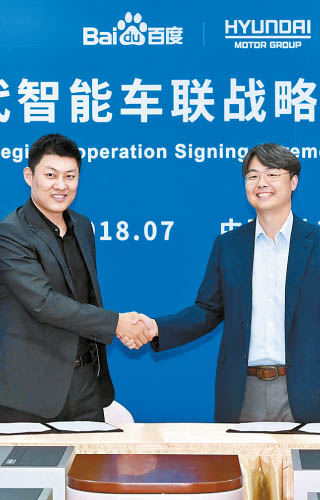 In addition to developing technologies together with Baidu, Hyundai Motor is also vying to create a credible image among Chinese consumers by expanding its partnership with influential local companies.

Baidu is China’s biggest search engine provider and is often referred to as China’s Google. The company has been expanding its realm to self-driving car technologies over the last few years.

The two companies have been collaborating on future mobility technology since 2015, but their latest agreement will take their relationship to the next level as they will form an alliance, according to the Korean auto company.

Xiaodu was first introduced in China early this month, and it is installed in Kia Motors’ new Sportage SUV, sold in China as the Zhi Pao.

Xiaodu is able to control some of the car’s systems, such as its navigation, media and door locks. It can also act as the driver’s personal assistant and can remember personal schedules, as well as give information about the weather and news to the driver. It can also do other simple tasks, like buying movie tickets.

Above all, Hyundai Motor says that emotional expression is what differentiates Xiaodu from other AI systems.

A separate screen installed on top of the dashboard shows Xiaodu’s eyes, which sometimes smile, wink or frown depending on the situation.

When the driver stares at the eyes for more than one second, Xiaodu winks back at the driver, for example.

“The convergence of ICT and the automotive industry is happening at an unprecedented rate, motivating us to develop and provide new possibilities for our customers,” said Choo Kyo-woong, the director and head of the infotainment development team at Hyundai Motor.

“Through our partnership with Baidu, we will develop industry-leading connected vehicles that exceed customer expectations,” Choo added.

Hyundai Motor has been pursuing diverse partnerships with global IT firms as part of the company’s attempt to take the lead in the burgeoning future mobility technology competition.

Hyundai has been particularly active in its partnerships with Chinese firms as the local market is hard to penetrate for foreign companies.

The partnership with Baidu was initiated in 2015, when the two companies co-developed a mobile connectivity system called CarLife.

Hyundai Motor is also collaborating with Chinese IT giant Tencent to use its QQMusic service in car infotainment systems. According to the company, the QQMusic service will be installed in Hyundai cars starting with this year’s Q3.