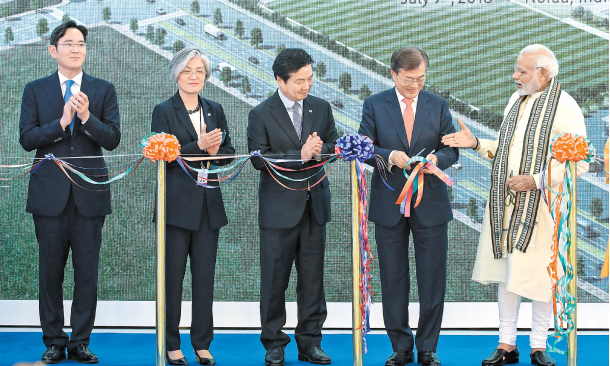 It was their first meeting since Lee was freed from prison in February.

“Congratulations on the completion of Samsung Electronics’ new Noida plant,” said Moon. “I am grateful that Samsung is playing a great role in helping India continue with its rapid economic growth. I wish that [Samsung] continues investing more and creating more jobs in Korea, as well.”

Lee said that the president’s visit to the factory empowered local employees and vowed to “try harder.”

Moon and Lee talked for five minutes as they took part in a ceremony celebrating the expansion of Samsung’s smartphone factory in Noida, south of the Indian capital of New Delhi. It was the first time Moon participated in an event held by Korea’s largest conglomerate as president.

Lee waited for Moon at the entrance of the factory and bowed deeply several times as the president approached.

The event was Lee’s first public appearance since he was freed from imprisonment over bribery charges in February by an appeals court. He kept a low profile during recent trips to Europe, North America and China.

Some expressed concerns over whether it was appropriate for Moon to meet with Lee, who is out of jail with four years of probation for his role in the political corruption scandal that toppled the Park Geun-hye administration.

A Blue House official said that it would shun a political interpretation of the president’s participation in the Samsung event, given that the government maintains a “consistent policy” when it comes to supporting new investments and job creation.

Despite having promised more jobs at his inauguration, Moon is now grappling with an ever-worse unemployment rate. Starting earlier this year, he has made a series of visits to conglomerates’ events and factories, such as Hanwha Q Cells’ plant in North Chungcheong and the opening ceremony for LG’s Magok Science Park in western Seoul, to encourage job creation.

Samsung started to expand its Noida smartphone factory, which also makes refrigerators, in June 2017. The tech giant increased the facility’s area from 120,000 square meters (30 acres) to 250,000 square meters on a budget of around 800 billion won ($720 million). The factory’s expansion made it possible for Samsung to make 10 million smartphones a month at the facility, the largest production capacity of any smartphone factory in the world.

“The Noida factory currently produces 68 million smartphones a year, and the annual production volume will grow to as much as 120 million by the end of 2020, when the factory goes into full operation,” said a Samsung spokesman.

Samsung, once the top smartphone vendor in India, fell to second place in the first quarter. China’s Xiaomi claimed the largest market share with 31.1 percent, trailed by Samsung at 26.2 percent and Vivo at 5.8 percent, according to April data from market researcher Counterpoint.

India, the world’s third-largest smartphone market after China and the United States, is one of the fastest-growing smartphone markets in the world and continues to show great growth potential. The smartphone penetration rate stands at a mere 25 percent in the country, which has a population of 1.3 billion. Market researcher Strategy Analytics predicts that Indian smartphone sales will exceed 200 million units by 2022, nearly double the 126.8 million units sold last year.

Samsung first started doing business in India in 1995, and began mass-producing TVs at the Noida factory the following year.