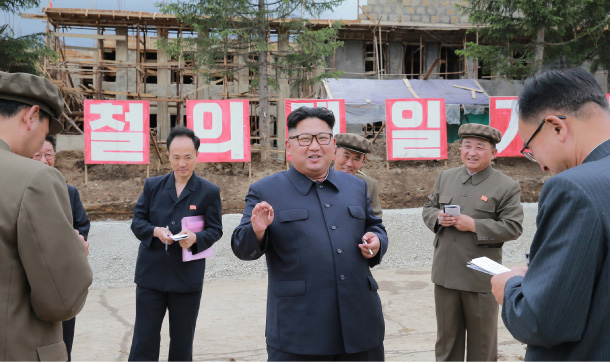 The leader’s whereabouts had been a mystery, especially after he did not appear at last week’s inter-Korean basketball friendlies or during U.S. Secretary of State Mike Pompeo’s visit to Pyongyang for high-level meetings.

South Korean media expected Kim to appear for at least one of the four basketball games North Korea played with the South because he was the one who initially floated the idea on April 27 during his first summit with South Korean President Moon Jae-in.

Kim Yong-chol, vice chairman of the North Korean Workers’ Party’s Central Committee, told South Korea’s Unification Minister Cho Myoung-gyon, who led the South Korean basketball delegation, last Thursday morning that Kim Jong-un might not be able to attend the games because he was in the suburbs for a so-called “field guidance.”

A field guidance refers to the North Korean leader’s appearance at a site, usually one related to the military, economy or industry, during which he gives directives and pep talks.

Kim didn’t meet with Pompeo, who made his third visit to the North in this year last Friday and Saturday. Pompeo was able to meet Kim in both his previous visits.

The Korean Central News Agency (KCNA) did not reveal when exactly Kim visited Samjiyon, which borders China, but it is customary for North Korean media to report on the leader’s activities a day after they were made due to security reasons, meaning Kim might have been in Samjiyon as late as Monday.

Samjiyon holds great mythical significance in North Korea because it’s home to Mount Paektu, allegedly the birthplace of former leader Kim Jong-il. It is also the mythical birthplace of the Korean race.

Kim Jong-un’s visits to the area often serve as a precursor to major decisions, like North Korea’s participation in the PyeongChang Winter Olympic Games earlier this year, and the execution of Kim’s uncle and political mentor, Jang Song-thaek, in 2013.

An English version of the KCNA report mentioning Kim’s recent field guidance to the Samjiyon Potato Farina Production Factory quoted the leader as underscoring the “need to equip the factory with modern machines for making a variety of foods.”

At Junghung Farm, Kim was said to have stressed the “need to direct efforts to stockbreeding to establish the food production cycle of agriculture and animal husbandry,” increase the fertility of potato fields and cultivate them in a scientific and technical way.

While visiting construction sites in Samjiyon, Kim reportedly stressed “modern civilization” as a key to developing the mountains, adding that houses and buildings should be built in a “diverse and peculiar way” that preserves the “characteristics of nature and topography.”