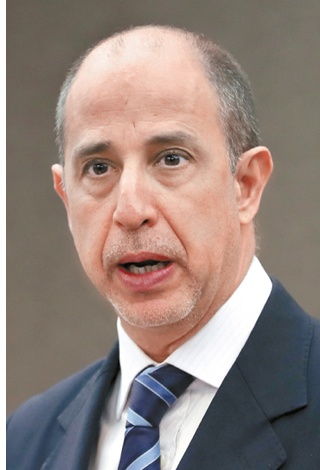 Tomas Ojea Quintana, the UN special rapporteur on human rights in North Korea, speaks at a press conference in Seoul on Tuesday. [YONHAP]

Tomas Ojea Quintana, the UN special rapporteur on human rights in North Korea, criticized the international community for ignoring the human rights situation in the North in recent summits with the nation.

“Neither the Panmunjom declaration nor the DPRK-U.S. statement includes an explicit use of human rights terminologies,” Ojea Quintana said in a press conference in central Seoul on Tuesday.

“In fact a specific reference to the human rights situation of people living in the DPRK cannot be found in any of these documents… and here lies the most important challenge for the international community.”

Ojea Quintana called on the South Korean government and the international community to bring the North Korean human rights issue to the dialogues.

“Bringing the human rights [issues] to the table is not a hindrance but a way to ensure that the peace talks are real and sustainable,” he said.

“This is not the first time that the human rights issue is seen as an inconvenience at a delicate moment. However, our experience at the UN has shown that there can be no genuine, peaceful and sustainable transition without it.”

Following an eight-day visit to Seoul, Ojea Quintana said the human rights situation in North Korea is “very serious,” especially in the countryside.

“Let me just say that from the information collected during this mission, the situation is very serious in regard to the human rights issues … and it remains dire especially in the countryside,” he said.

“The UN reported that chronic food insecurity and early child malnutrition are widespread in the DPRK and 10 million people, or 40 percent of the population, are requiring humanitarian assistance. The total food production in the country decreased by 7.42 percent in 2018 compared to last year.”

He emphasized that it is the individual choice of North Korean defectors if they want to return to the North, including the North Korean waitresses. Their manager, who defected with them to the South, told CNN in May that he tricked them into defecting to the South, at the request of South Korea’s National Intelligence Service.

“My recommendation to the South Korean government is first, carry out a total and independent investigation to find out as soon as possible what happened in this situation,” he said.

“Second, in regard to the particular situation of these women, my stance as the human rights rapporteur is to respect the decision of the victims, in their decision to what to do, whether to remain in the Republic of Korea, or do some other thing … and it is not for the UN, not for Republic of Korea, or DPRK, to have a say in this regard.”

Ojea Quintana will be submitting a report about his mission to Korea to the UN General Assembly in October.