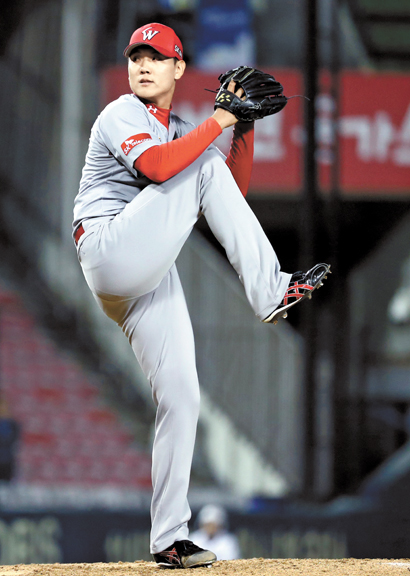 Nam Yoon-seong of the SK Wyverns finally debuted in the KBO in May 30 against the Doosan Bears, 12 years after he was first drafted. [ILGAN SPORTS]

At age 30, Nam Yoon-seong of the SK Wyverns has finally made his KBO debut. 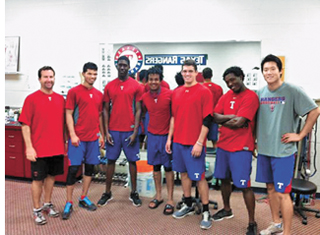 A photo of Nam Yoon-seong, far right, and his teammates while playing for the Texas Rangers. [ILGAN SPORTS]

In 2006, Nam was drafted by the Doosan Bears. Instead of playing in the KBO he left for the United States to pursue his dream of playing in the big leagues. Twelve years later, Nam finally played his first game in the KBO against the Bears on May 30 at Jamsil Baseball Stadium.

“My brain was saying it’s fine but my body wasn’t,” Nam said. “I felt a little thrill.”

Nam was originally drafted by the Bears under the name Nam Yoon-hee. Rather than appearing for the Seoul club he signed with the Texas Rangers. Having started his baseball career at the lowest level of the minor leagues, Nam was eventually promoted up to the Rangers’ Double A team, but didn’t make a single appearance as he injured his shoulder prior to his promotion in August 2011.

Nam was eventually released by the Rangers and headed to Japan in search of new opportunities. He tried out for the Hokkaido Nippon-Ham Fighters and the Yomiuri Giants in the Nippon Professional Baseball (NPB), but failed to receive an offer from either team. As a result, Nam returned to Korea and joined the Goyang Wonders, a professional baseball team in the Freedom Division of the Futures League.

Nam’s struggles continued, and he didn’t throw a single competitive pitch for the next two years. In 2013, Nam left to complete his military service. As Nam slowly faded from memory, two of his high school competitors - Ryu Hyun-jin of the Los Angeles Dodgers and Cha Woo-chan of the LG Twins - were quickly becoming Korean baseball legends.

Just as the final bell was about to toll on Nam’s career, he was given one last chance to play when the Wyverns picked him in the 2017 KBO Rookie Draft. As Nam’s speed has fallen from 147 kilometers per hour (91 miles per hour) to only 140 kilometers per hour over the years, he spent his entire rookie season in the Futures League. This season he was finally called up to the KBO, 12 years after graduating high school.

“Rather than regrets, it allowed me to be a stronger person,” Nam said.

Below are edited excerpts from an interview Nam had with Ilgan Sports.

Q. How did it feel to actually play in the KBO?

A. I’m still adjusting. I feel thankful about being able to play in more games and I’m slowly gaining confidence.

How did you feel when you first heard about getting called up to the KBO?

I was dazed. When I got called up the second time [on June 19], I felt like I got called up faster than I thought. When I first got to the KBO, I wasn’t ready both mentally and physically. I was sent back down because I needed to make some improvements, so I told myself to reorganize and be prepared to get back to the KBO. I was given another opportunity quicker than I thought. Since this is my second chance, I’m going to try my hardest.

Who congratulated you the most?

A lot of my close friends and my family congratulated me. They’ve watched me since I was little so they’ve waited for a long time. Though I’m not settled in the KBO, they were very impressed that I made my debut. I’m very thankful [to them].

What did you learn from your career in the minor leagues, Japan and at the Wonders?

I became a stronger person and I learned to be thankful for every little thing. Since I’ve been through the time when I injured my shoulder and was at a point where I couldn’t play baseball anymore, I’m just thankful about the fact that I can play.

Do you have any regrets? What do you regret it the most?

I’ll be lying if I didn’t have any regrets but now I’m fine. I regretted it the most when I hurt my shoulder. At that time, it felt as if that was the end of my baseball career, so I started regretting my decision [to leave Korea]. But I’m OK now. I feel like I had to go through all that to get to where I’m at.

The speed of your pitches is a lot slower than when you played in the minor league. What happened?

I’m stressed about it too. But I can’t fix it with just desire and passion. My physical condition has changed a lot compared to the time [I played in the minors]. I’m trying my best with what I have. If I’m trying to do something that I can’t then that’ll just add more pressure and stress. I’ll need more time but I’m trying every day.

What was the hardest point in your career?

Right before my shoulder surgery in the United States in 2011, I walked 40 minutes from the baseball stadium to my house crying. I can’t forget the emotions when I went to the NPB clubs to try out and the times when I couldn’t play in games while playing for the Wonders. When I train with the Wyverns players and sit in the bullpen, those memories go through my head. As time went by, I learned to appreciate this more.

You seem to be weaker against right-handed batters. How are you improving this?

Coach Son Hyuk has been paying a lot of attention to me. We’re looking for ways to maximize my strength on the mound. Since we’re in season, it’s hard to make my pitches faster. It’ll be good if the speed of my pitch increases, but if I try too hard I may lose my strength.

I want to stay in the KBO without getting injured and play in the postseason.