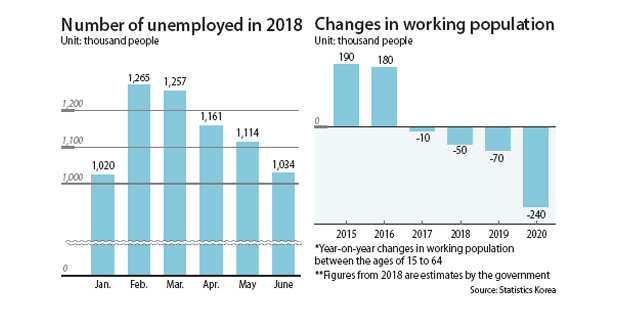 The employment situation in Korea continued to deteriorate in June.

According to Statistics Korea on Wednesday, Korea’s economy added a total of 106,000 jobs last month compared to a year ago with the total number of employed standing at 27.12 million, continuing the very sluggish growth of earlier months this year.

“This is the first time that the number of new jobs added remained at or below 100,000 for five straight months,” said Bin Hyun-joon, director of the employment statistics division of Statistics Korea. “It’s hard to predict how things will turn out in the second half, but based on the data of the first half, the employment condition in Korea does not look good.”

The job situation is at its worst since the 2008 financial crisis, a government official explained. In an 18-month streak from September 2008 to February 2010, new job levels were similarly low.

Data showed that the unemployment rate for the month improved slightly, down 0.1 percentage point from a year before to 3.7 percent, which was the result of a fall in the jobless rate among Koreans 15 to 29 years old.

An official from Statistics Korea said that the decline was due to the civil service examination, which was moved up to May this year. Last year, the exam took place in June. Young people taking the exam are usually jobless in that month.

Unemployment rates for other age groups showed slight increases. A major factor in the poor, newly employed figure is a steady decline in the working age population, according to the government.

The number of people who are economically active in that age range is also retreating, government data show.

“In the long term, the population able to work will reach its peak and fall from there,” Bin said.

“The Korean economy added about 300,000 jobs during the same period last year and it’s difficult to explain the number of new positions being slashed to one-third of what it was by demographic changes,” said Sung Tae-yoon, a professor of economics at Yonsei University. Sung said that many factors contributed, including slow economic growth, to a sharp hike in the minimum wage and uncertainties about the job market in the near future.

The employment data for June were released just a few days before the Minimum Wage Commission’s deadline on Saturday to decide the increase of the hourly base salary for next year.

Nearly 15 percent of some 5,000 workers surveyed said the government should freeze the minimum wage for next year to preserve jobs. About half of the surveyed workers said the rate of increase should be kept below 10 percent.