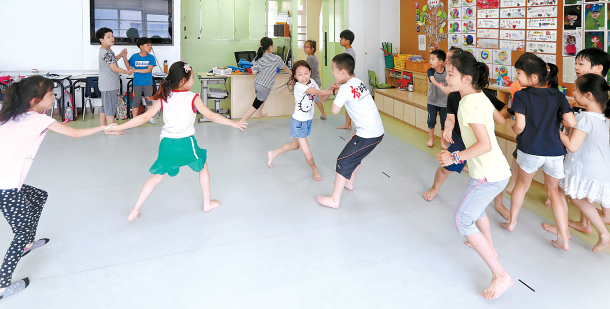 Second graders at Seoul Munsung Elementary School in southern Seoul play inside their new classroom that features soft padding on the floor. The second grade classrooms at the school were remodeled as part of the Seoul Metropolitan Office of Education’s “Dream Classroom” project. [SHIN IN-SEOB]

The cold cement floors, the ash gray walls and the heavy desks and chair were what eight-year-old Park Sae-mi hated most about going to school. In fact, the drab conditions at schools around the country is what many young students say is what they enjoy the least about their education. But that’s no longer the case for Park as the classrooms for first and second graders at her school underwent a total makeover early this year, giving the students something to look forward to when they returned to school. Park, who is now in second grade, says she loves her school - Seoul Munsung Elementary School in Geumcheon District, southern Seoul - and hopes that “summer holidays never come.”

Seeing her daughter enjoying school so much has really pleased her mother, Lee Ha-yeon.

“Sae-mi is quite sensitive and reserved, so she was just a shy girl in class,” said the mother. “But now she’s very outgoing and active at school. She no longer comes home saying she is tired. She goes to school every morning as if she’s going to a playground, so how can I not be pleased?”

The classroom makeover at Park’s school was a part of the Seoul Metropolitan Office of Education’s “Dream Classroom” project that began last year, and Seoul Munsung Elementary School was selected as one of the schools to be renovated.

Last month, the JoongAng Sunday, an affiliate of the Korea JoongAng Daily, visited Park’s classroom to witness the change. Park and her classmates were lying on the floor, which is no longer cold cement, rolling across the spacious classroom trying to make “human gimbap (seaweed rice rolls),” with their bodies. They were in the middle of a “cooperative play” class, which is an integrated curriculum for elementary schools. 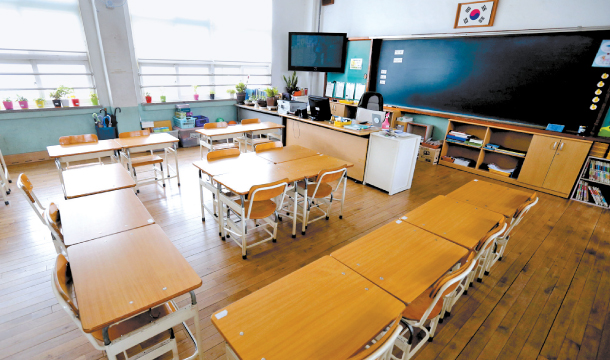 A conventional classroom at an elementary school in central Seoul. [YONHAP]

This kind of activity is now possible thanks to the new soft padding on the floors of the classroom. The students can now take off their school shoes and roll around on the bright green classroom floor. There’s even a floor heating system for winter, and the new desks and chairs are a lot lighter than the old ones. They can now be easily pushed against the walls by these young students for group activities inside the classroom.

The most distinctive change from Korea’s conventional classroom, was the layout. Usually a blackboard gets hung up in front of the class and in front of it stands the teacher’s podium, which overlooks rows of student desks. But in Park’s new classroom, the blackboard and the teacher’s podium are positioned against the walls by the corridor, making space in the front and the back of the classroom so that more creative activities can be organized. A small stage is also installed in the back of the classroom. In short, students no longer face “the front” all the time, or even think about where the front of the classroom is.

“One student wrote in their journal, ‘I wish the seven days of the week could be Monday, Tuesday, Wednesday, Thursday, Friday, Friday and Friday so that I can come to school every day of the week,’” said Kim In-won, a teacher who works in the newly-designed classroom. “Thanks to the ‘Dream Classroom’ project, the new space design really changed the attitudes of the students.” 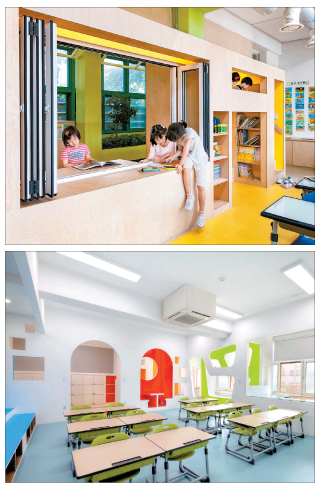 The “Dream Classroom” project began last year, transforming classrooms at 20 schools in Seoul. This year, 44 schools have been selected. One architect designs new classrooms for one school, giving students the chance to grow in a 21st century-style learning environment.

Shin Ho-seop of SHIN Architects was chosen to design four second grade classrooms at Seoul Munsung Elementary School. Shin says that he was shocked to see the classrooms when he first visited the school.

“[They had] hardly changed from the classrooms of my time,” said Shin. “The curriculum at elementary schools these days has changed a lot from the past. There is more group work and cooperative play for these young students. The new space design caters to these needs.”

Shin says he wanted to design a more spacious classroom and break boundaries.

“I really put a lot of thought into the design so that young students of today can enjoy learning in a better environment,” he added.

Lee Mi-kyung, the school’s principal, said the new classroom design “seems to have even changed the children’s way of thinking [and allows them] to have more freedom.”

“I hope that the classrooms of other grades could also get a makeover,” she added.

Since different architects are assigned to different schools, the remodeled classroom designs differ from one another. Architect Choi Hae-jin of ODDs&ENDs designed classrooms for first graders at Songjeong Elementary School in western Seoul. Choi even designed new multi-purpose furniture for the classrooms that can be either a chair, a cabinet or a stage, depending on the purpose.

According to the architecture firm, the first grade classrooms at Songjeong Elementary School were not only outdated, but “not at all considerate towards students who are the main users.”

“New and innovative curriculums have been adopted but the conventional design of classrooms did not help,” said Choi. “It was necessary to come up with a new design that suits the behavior patterns of students and the new curriculums.”

Despite the different designs, every remodeled classroom under the “Dream Classroom” project shares a common goal: catering to children.

“Companies today continue to agonize over better space designs for their employees to increase creativity and collaboration,” said Kim Jung-im of Seoro Architects who directed the “Dream Classroom” project. “In that sense, education institutions have been somewhat neglectful in renewing classroom designs for students.”

According to Kim, only counting first and second grade classrooms, the number of students who have access to the newly designed spaces is already in the thousands in Seoul alone.

“That’s why we are thinking about making the designs and floor plans open source and make it public for other schools to use,” Kim added.

Korea’s education policies have changed numerous times over the years but school designs have stayed the same for more than half a century. This is mainly due to the set standard design for public schools, which was established in 1962. According to the standard, the schoolyard must be located to the south of the school. Each floor should have a long corridor that’s about 10 meters in width, while the floor size of a classroom should be about 9 meters by 7 meters. It even standardizes the size of the windows and the height of a classroom.

This was the country’s attempt to quickly cater to the rapidly increasing number of students in the 1960s, and quickly build many schools at a low cost. The article that states that all schools must follow this standard was removed in 1992, but education offices continued to follow the regulations as a custom. That’s because the standard design, according to experts, seems like the best way to manage and supervise the students while minimizing construction costs.

“The lowest costs per unit area is allocated to elementary, middle and high schools as well as kindergartens among all public buildings,” said Jeon Young-hun, an architecture professor at Chung-Ang University. “It’s even lower than the cost to build a prison. This kind of budget has been blocking the increase in quality of Korea’s education facilities.”

Although slow, changes in classroom designs have been seen ever since Kim Seung-hoy, professor of architecture and architectural engineering at Seoul National University, was appointed as an adviser to the Seoul Metropolitan Office of Education in 2016. It was the education office’s first attempt to improve the learning environment for students and break away from the conventional system.

The attempt was also needed in order to tackle the problem of an increasing number of unused classrooms following the drop in the number of students across the country, as well as aging buildings. According to the education office, 76 percent of the school buildings in Seoul were built in the 1980s, and therefore are in urgent need of repair.

The education office also could no longer neglect the fact that many students are unsatisfied with their school facilities.

“Korean students tend to spend more hours of the day at school than at home,” said Professor Kim. “Therefore, I believe the classroom designs should evolve into a living space that makes our students happy.”

“We should abolish the standardized system of building and managing schools, and really plan and agonize over what kind of design would really be suitable for students today,” Kim added.

In that sense, the “Dream Classroom” project, according to Kim, has been a “positive stimulus for the country’s education circles.”

He appointed Architect Kim Jeong-im to head the project, and encouraged young Korean architects to take part as well.

“This project allowed the architects, parents, teachers and the students to realize how a well-thought-out space design can change so much,” said Kim.