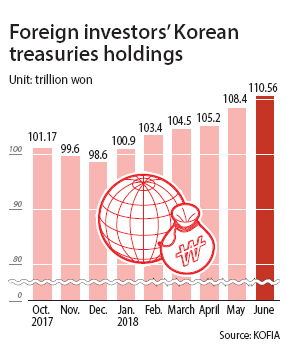 Korean treasuries have been rising in popularity, as foreign investors have been increasing their purchases amid rising tensions between the world’s two biggest economies - the U.S. and China.

The Korean financial market is vulnerable to rising risks in the global market and the recent trade dispute between the U.S. and China has been no different - the local stock market has been falling and the won has depreciated.

In fact the Kospi on Wednesday turned around after three positive days to close 13.54 points or 0.59 percent lower on the news that U.S. President Donald Trump has decided to further extend the trade war against China by levying a 10 percent tariff on $200 billion worth of Chinese goods. China responded that it would levy equivalent tariffs on American goods.

The recent trade tensions have resulted in foreign investors selling off their stock holdings in the local market. According to the Korea Exchange, foreign investors sold roughly 2 trillion won ($1.8 billion) worth of stocks in the month leading up to July 10.

But the situation in the bond market has been different, with foreign investors increasing their purchases.

According to the Korea Financial Investment Association, the balance on foreign investors’ treasuries holdings as of the end of last month amounted to 110.56 trillion won, which is a 2.1 trillion won increase compared to May. The total balance is an all-time record.

Bloomberg reported that foreign investors in the second quarter of this year have purchased roughly $15.8 billion worth of Korean treasuries, which is the largest amount in five years.

Thanks to the rising popularity, the 10-year maturity treasuries’ interest on Tuesday was 2.533 percent. In just two months the interest rate has dropped 0.25 percent.

The growing popularity of Korean treasuries is largely believed to be the result of foreign investors seeing it as a safe asset, as Korea’s fundamental economy has been strong with its current account surplus continuing for 75 consecutive months, an all-time record. Korea’s foreign reserve reached more than $400 billion for the first time as of May.

Also the fact that foreigners only account for 6.31 percent of those holding Korean treasuries was considered a factor that has attracted more overseas investors as the fact that local investors have a larger holding lowers the risk of foreign investor exodus.

The current situation is likely to continue as the Bank of Korea is unlikely to raise the key interest rates.

“As the possibility of raising the key interest rate is getting smaller, there’s rising interest on the Korean won further depreciating, so foreign investors are likely to continue to buy Korean treasuries,” said Kong Dong-rak, a strategist at Daishin Securities.