Mok-dong gets the first Homeplus Special branch in Seoul

Mok-dong gets the first Homeplus Special branch in Seoul 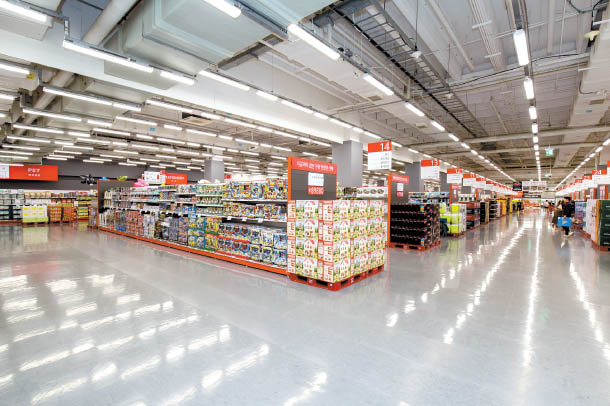 The Homeplus Special store in Mok-dong, western Seoul, presents both small-packaged products and bulk items in one place with wider aisles. [HOMEPLUS]

Mok-dong in western Seoul was one of the earliest planned communities in the country and is a battlefield for local retailers. Residents of the area have two Lotte Mart branches and a Hyundai Department store directly linked to the subway station. There is even one of Korea’s few Costco stores in neighboring Yangpyeong-dong.

Homeplus’ Mok-dong branch also has a long history, having first opened as a Carrefour in 1996. The branch has now had its fourth makeover, re-opening today as the first Homeplus Special store in Seoul. Homeplus’ new Special stores combine the bulk discounts of a warehouse retailer like Costco with a conventional grocery store.

“Mok-dong is not an easy ground for retailers, but we’re launching the first Special store in Seoul here because we’re pretty confident this will work,” said Kim Woong, Homeplus’ chief commercial officer, at a press event on Wednesday.

The company transformed two of its existing branches in Daegu and Busan into Special stores late last month. Kim said revenue at the two stores rose 113.2 percent, and the average purchase amount per consumer increased by 45 percent year on year in the past two weeks.

The company said that the main concept for its Special branches, first announced in March, will be a hybrid of discount chains and warehouse-style retailers, meaning it has small packaged goods and fresh food but also low-priced bulk items.

Most of the aisles at the Homeplus Special branch in Mok-dong are now equipped with specially designed shelves. The new fixtures look just like normal grocery store shelves designed to hold small products at the top, but now have a much larger space at the bottom to allow for bulk items to be stacked on top of each other.

A16-unit box of Binggrae’s banana milk and a set item consisting of a 48-can Cass beer crate and a five-pack of Shin Ramyeon can only be found here.

“Our concept is hybrid, but the standard is clear: If the product is storable, we’ll prepare items in bulk, but for items like milk and vegetables, we’re only going to offer the amount we can sell that day,” Kim said.

Another noticeable feature is the wide aisles. Homeplus has widened the aisles by 22 percent to allow two customers to pass each other with carts, removing the inconvenience of waiting for other shoppers to pass.

Consumers at the pre-launch event on Wednesday immediately noticed the difference.

“I love the fact there’s more space now - it makes the shopping experience much more convenient,” said Cho Hyang-ran, a 54-year old resident nearby who said she is a regular at the Homeplus Mok-dong branch.

Homeplus said it reduced the range of products sold by 20 percent to 17,000 by focusing on best-selling products and items sold exclusively at Homeplus Special like its private brand Simplus and goods imported from overseas.

“Homeplus’ vision is to continue to offer value to consumers,” said CEO Lim Il-soon at the press event. “The Special store is the first outcome of trying to solely think from their perspective.”