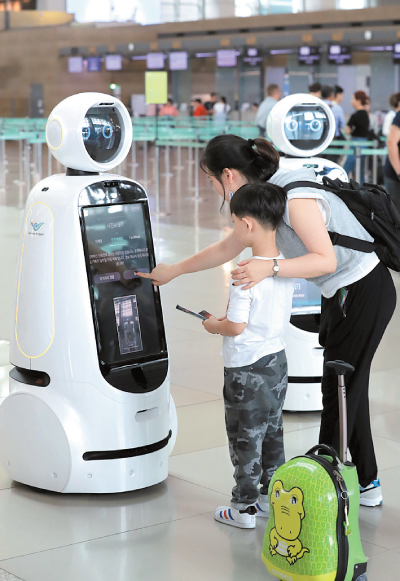 Incheon International Airport will deploy robot guides that can escort travelers to immigration and baggage claim areas from July 21, in time for the summer peak season.

The airport said it is first in the world to put robots into service, as opposed to testing them.

The second-generation robot, dubbed Airstar, is an upgraded version of guide robots that were tested in the airport last year.

Airstar robots have improved driving and voice recognition features compared to the test versions and are also capable of expressing 14 different emotions.

As for voice recognition, the new robot is designed to distinguish voice commands from other noises in the airport. The robot speaks four languages: Korean, English, Chinese and Japanese.

The robots will escort travelers, tell them how busy immigration desks are, what products are restricted on board and the way to gates after scanning barcodes on boarding passes.

The robots can also take photos of travelers in the airport and send it to them by email or text message.

Eight robots will be deployed in Terminal One and six in Terminal Two, which opened at the beginning of this year.