DP floor leader: Gov’t must be careful when raising wages

DP floor leader: Gov’t must be careful when raising wages 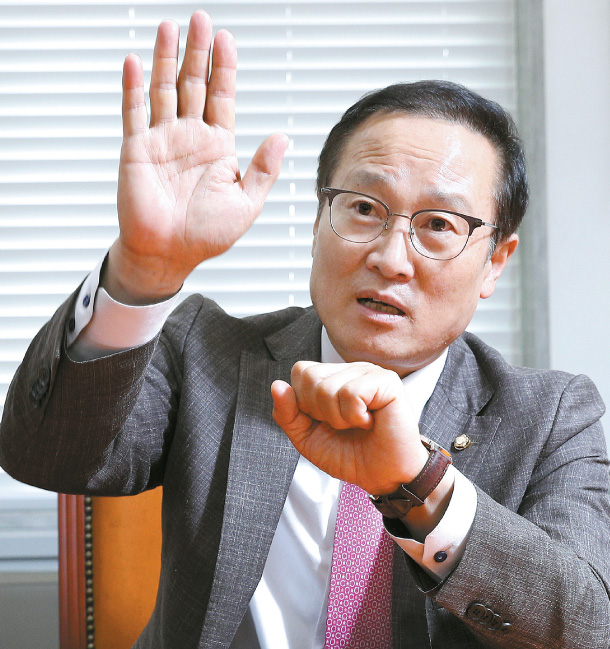 Hong Young-pyo, the floor leader of the ruling Democratic Party, has been an advocate for labor his entire political career. He is the last person one would expect to criticize any labor-friendly policy.

After it was faced with public backlash, the government decided to adjust the minimum wage to include bonuses, but the Korean Federation of Trade Unions is protesting against it. The unions said they won’t participate in any meetings with management or the government to discuss the issue.

“When a policy is undeniably illogical, one needs to fix it,” Hong said in a recent interview with the JoongAng Ilbo at the National Assembly. “The Korean Federation of Trade Unions is being overly obstinate about it. They just don’t know how to compromise.”
Below is an edited excerpt from the interview.

Q. Economic indicators are looking bad, and people are saying that the Moon government’s income-led growth policy is not working. What do you think about this?

A. I would not agree with that. People say that the increased minimum wage has led to the worsened employment rate in May. But the 16.4 percent raise in the minimum wage only went into effect this January, so it is too early to evaluate its effectiveness. It will take at least a year to gauge how effective the policy is.

Industry experts are saying that income-led growth is like putting the cart before the horse. They say it will not lead to either long-term nor short-term growth.

What’s important is that the minimum wage hike isn’t all about income-led growth. Let’s take a look at gross national income (GNI) from 1996 to 2016. During this period, household income in Korea shrunk by 8.7 percent, while the corporate income jumped by 8.4 percent. In other countries, it was mostly the other way around during the same time. That is because the salary given to households was too small in Korea. This is the reason behind income-led growth.

But since the minimum wage was raised, the number of new jobs created every month dropped below the 200,000 mark for four consecutive months.

It is hard to pinpoint the reason behind May’s worsening employment market. It may be because the number of people who do productive activities may have dropped, or it may have been due to the recession of the manufacturing industry in general. The minimum wage hike is a cure to the social polarization caused by continuous technological improvements. Barack Obama raised the minimum wage during his term and so did Japan’s Prime Minister Shinzo Abe. The policy is for laborers who receive low wages.

There is some differentiation between Korea’s policy and the U.S. and Japan’s policy. Japan and the United States applied different rates to different industries.

I think this is a realistic approach that Korea should consider following. I hope such issues are being discussed by the minimum wage committee.

It should be implemented depending on economic indicators such as the employment rate and the economic growth rate. But that needs to be discussed by the related parties. The trade unions said they would now participate in the minimum wage committee, and they also met with the president recently, so we should expect some tangible results.

The 52-hour work week is also controversial at the moment. Some say it is being implemented too quickly.

The shortened work hours started in July. Also, it is only being implemented in big companies that have more than 300 employees. People shouldn’t blame this policy for the weak economy in April and May.

Shouldn’t there be time for companies to adjust?

Lawmakers, companies and the government agreed to shortened work hours back in 2014 for selected industries. The National Assembly waited about five years to handle diverse opposition to it, and I think that was the problem. I have been talking about the issue since 2009 when I became a lawmaker. Starting to implement it now is not too early at all, and it is going to be gradually implemented until 2022.

What about the consequences that small-and midsize companies have to deal with?

Companies need to make efforts to adjust to the new policy. In the face of the fourth industrial revolution, working long hours doesn’t mean more productivity. Creativeness and imaginations are more important. Just because there is a problem doesn’t mean that the implementation time should be delayed.

What’s important is how much workers will participate in this social issue.

I agree, but the circumstances are not ideal. For example, companies want to pay part-time workers by the hour and expand the number of jobs. On the other hand, workers want regular employment to guarantee welfare and a safety net.

Is there a solution?

Unemployment benefits are only available for eight months at most and can only provide 700,000 won per month. Aside from this, there is no guaranteed way for worker’s and their families to live, which is why something like the SsangYong Motor incident happens when a company undergoes restructuring. [A SsangYong employee killed himself after being fired.] There is about 10 trillion won in the state budget for employment insurance. If it gets raised to around 30 trillion won, the government can pay out 2 million won per month per person. Things might get different if a person with an annual salary of 50 million won can receive about 3 million won per month in unemployment benefits.

For sustainable growth, corporate investment is vital. In Korea, this can only become possible if regulations are improved.

Deregulation is the way to support innovative growth systematically. For our party, we try to do it through a regulatory sandbox, but I admit that the Democratic Party has not been so productive in that area.