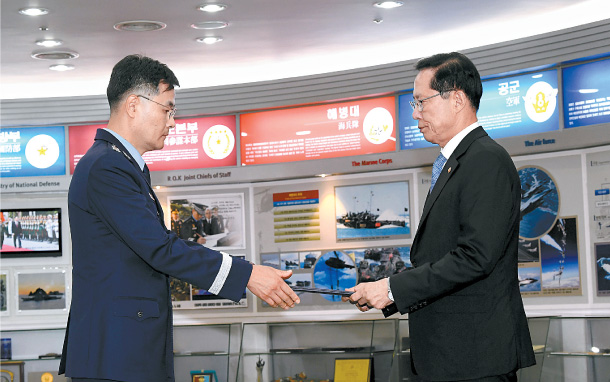 An Air Force colonel will lead a month-long independent probe into allegations that the military’s intelligence unit, under the former administration, drew up plans for a declaration of martial law in case the Constitutional Court decided not to oust Park Geun-hye from the Blue House and chaos broke out, the Ministry of National Defense announced Wednesday.

Col. Jeon Ik-soo, chief of the Air Force's Judge Advocate General Office, will lead a group of some 30 military prosecutors, all of whom are unrelated to the Army and Defense Security Command, to investigate the case until Aug. 10, said the ministry.

Jeon was tapped by Defense Minister Song Young-moo, who vowed not to receive briefings from the team during their probe as a way of guaranteeing its independence.

The appointment came a day after President Moon Jae-in ordered an independent investigation into assertions that the Defense Security Command compiled a nine-page report in early March 2017, apparently before the Constitutional Court removed President Park Geun-hye from office on March 10, which detailed the option of declaring martial law if the court ruled against her removal and angry mobs stormed the streets.

Rep. Rhee Cheol-hee of Moon’s Democratic Party revealed the report to local media on July 5, saying the plan was described to the defense minister at the time, Han Min-koo.

Moon ordered Song on Tuesday to carry out a “speedy and fair” investigation into the case while he was on a state visit to India, adding that the Defense Security Command should also be probed on suspicions it spied on relatives of people who died in the Sewol ferry sinking.

The Park administration was blamed for botching the rescue operation when the ferry capsized off the country’s southwestern waters on April 16, 2014, killing more than 300 passengers on board.

During a radio interview with YTN on Wednesday, Rhee said he assumed the report was briefed to Park one way or another, though there was no proof yet. “If [the military] prepared to declare martial law behind the president’s back,” he said, “that itself is a conspiracy to stage a coup.”

If Park hadn’t known about the martial law plan, said Rhee, at least her chief of staff or national security adviser could have.

Chairwoman Choo Mi-ae of the Democratic Party echoed Rhee’s statement, saying the Park Blue House could be blamed for plotting a rebellion if it actually tried to declare martial law and deploy military troops on the streets.

Rep. Park Wan-joo of the same party cast doubt that the main opposition Liberty Korea Party had not known about the martial law plan, saying it should admit whether it was tipped off about it in light of the fact that it was the ruling party at the time.