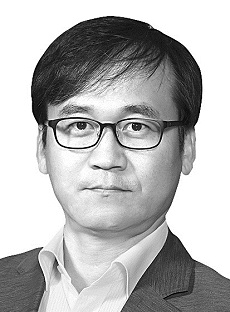 Jung Kyung-min
The author is a senior business news editor of the JoongAng Ilbo.

“Now, only seven years left,” said Samsung Chairman Lee Kun-hee in Los Angeles in February 1993. Los Angeles was the first stop on a six-month tour of leading global companies with hundreds of executives. He visited a supermarket and was shocked. Sony and NEC products were placed at the front of the shelves, and Samsung products were collecting dust in the corner. At the turn of the century, he felt that Samsung could collapse if it didn’t change. In Frankfurt, he said, “Change everything but your wife and children.” Afterwards, Samsung reinvented itself as a global manufacturer surpassing not just Sony but also Apple and Intel.

“China can launch a spacecraft but cannot make the tip of a ballpoint pen,” lamented Chinese Premier Li Keqiang in December 2015. China produced 40 billion ballpoint pens a year, taking up 80 percent of the global market. But it could not make the rotating ball at the tip of the pen. Only a few countries, including Japan and Switzerland, had the technology to produce the chrome or stainless steel balls. Korea’s first ballpoint pen was Monami 153 in 1963, but the ball was produced in Korea starting in 1975. The tip of the ballpoint pen symbolized a gigantic Chinese manufacturing industry without core technology.

The sense of crisis about the ballpoint pen has in part led to Made in China 2025, a grand 30-year plan to improve the quality of Chinese manufacturing in three stages. The first stage is to make China a “manufacturing power” on par with not just Korea but also the United States, Germany and Japan by 2025. By 2049 — the centennial of the foundation of the People’s Republic of China — President Xi Jinping ambitiously hopes to surpass the United States.

To the United States, Made in China 2025 is a nightmare. The United States already suffers a nearly $400 billion deficit annually in trade with China. If China’s manufacturing sector matches that of the United States, Uncle Sam wouldn’t be able to win the economic war. For the Trump administration advocating America First, that would be a threat as frightening as North Korea’s nuclear weapons. The U.S. government’s tariff bomb on $34 billion worth of Chinese imports directly targets the Made in China 2025 campaign and its aspirations. The battle between Washington and Beijing is not merely a trade war but a battle for control of the manufacturing industry in the future.

Made in China 2025 is also a catastrophe for Korea’s manufacturing industry, which heavily relies on selling intermediary goods to China. If China becomes a manufacturing power on par with the United States, there will be no place for the Korean manufacturing sector. Also, China being a one-party state, the government can push whatever program it wants — and use its muscle to make sure it succeeds.

Between January and May of this year, China’s CATL topped Japan’s Panasonic in the global electric car battery market. In the same period last year, CATL shipped only a quarter of Panasonic’s volume. Behind its success is the Chinese government. Since 2016, Beijing has not provided subsidies to Chinese electric cars with Korean batteries. As the subsidy accounts for half of the vehicle price, Korean batteries can hardly compete with Chinese products, regardless of the quality. It is just a matter of time before China also catches up with Korea in semiconductors.

Korean manufacturing is in a serious dilemma. If the United States delays the success of the Made in China 2025 campaign with tariffs, its lifespan can be extended. However, exports would be inevitably affected due to the ongoing trade war between the two largest economies in the world. If the United States and China dramatically come to an agreement, it could offer some relief for now, but the future then becomes even more uncertain. At the end of the day, the fate of the Korean manufacturing sector depends on the battle between the two giants.

The only one way to avoid being caught in the middle is to find an industry with future potential as promising as semiconductors. Without having the competitiveness that China wouldn’t dare to challenge and the United States would envy, Korea is bound to be swept up in the tsunami of Made in China 2025. As Lee Kun-hee cried in Los Angeles in 1993, Korea’s manufacturing industry has only seven years left.