We all must thank Kwak

We all must thank Kwak 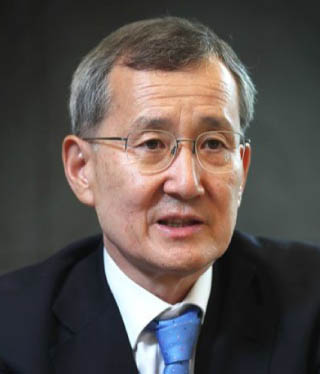 Kwak Tae-seon, the former CEO of Baring Asset Management Korea, left the country after he revealed that the Blue House meddled in the appointment of a new chief investment officer.

Kwak Tae-seon, the former CEO of Baring Asset Management Korea, has left the country. His phone number no longer exists. He may have left his mother country for good. Kwak became a problem after he blew the whistle on the second most powerful man in the Blue House — the president’s policy chief Jang Ha-sung.

Kwak tainted the upright image of the former liberal scholar as well as the president by exposing the government’s meddling in the recruitment of the chief investment officer (CIO) of the National Pension Service (NPS). Kwak was denied the job, despite assurance from the policy chief that the position was his, and the Blue House indicated that Kwak failed to make the cut over suspicions of draft dodging.
Kwak said he applied for the CIO position at NPS out of “dedication” to the public office. He has built enough wealth. He returned to his mother country and started an asset management company he later sold to Baring Asset Management in 2013.

He worked at Baring Asset Management Korea ever since. He left the company’s board at the end of last month after he spilled the beans on the CIO affair. He was refused for a job that pays 300 million won ($266,240) a year. If he had stayed on as the CEO of a foreign asset management company, he would have made more than 500 million won a year. But if he had become CIO of the NPS, he would have been based at its Jeonju headquarters, and would have been banned from finding job in the financial industry for three years after retirement.

CIO of the NPS was once a very prestigious position, as the NPS is the biggest investor in Korea and the third-largest pension fund in the world, with assets of nearly $570 billion under its management. But the post is no longer desirable, as all recent CIOs were pushed out of office in disgrace. The seat has been vacant for nearly a year due to a lack of candidates.

Not only was Kwak denied the job, he was humiliated to the extent that he’s now seeking self-exile. The price for “dedication” is dear. However, his sacrifice has not been in vain. The public has become aware of how important the ­CIO position is. Issues surfaced that would have stayed hidden, all thanks to his revelation. Kwak did his country huge favors by exposing three major issues.

First, the Blue House’s meddling in appointments at public institutions has been exposed. When it was the opposition party, the Democratic Party strongly criticized conservative presidents for using executive seats at public enterprises as rewards for loyalty or campaign help.

After the liberals returned to power, they filled CEO, auditor, and board member positions with figures from the campaign or loyalists to the ruling party. Since the launch of the Moon Jae-in administration, 35 political figures landed comfortable executive seats at 29 state enterprises. Kwak’s testimony is proof. No one will believe the Blue House no matter how it claims to be neutral in appointments.

Second, the national pension fund’s return rate from its investments sharply decreased this year. The annual returns from its investment, which averaged 7.28 percent last year, sank to 0.89 percent (or 1.66 percent a year) in the first four months of this year. Industry sources said the fund’s profitability worsened in May and June due to the stock market’s troubles over a trade war between the United States and China. They predict the fund’s return rate could enter negative territory for the first half of the year.

Former NPS CEO Jun Kwang-woo said a percentage point gain in the return rate could delay the depletion of the pension’s funds by six to eight years. But losses can accelerate the thinning of its coffers. According to the Ministry of Health and Welfare, the pension fund could be depleted by 2060. If the fund makes such pitiful profits from its investments, those in their 20s and 30s will have no coverage left in their old age after having made monthly contributions during their career. The pension system would break down.

Who would take responsibility if 100 trillion won of the pension fund went into public housing, as the ruling party suggested?

To address these problems, the fund management headquarters must be separated and ensured of sovereignty. A capable CIO must be recruited first. Economic conditions at home and abroad are getting worse.

The CIO’s task is to balance the profitability and security of the funds. The position has no room for political preferences or ideology. The government must not consider the idea of using the NPS to tame chaebol along with other law enforcement agencies such as the police, prosecution, antitrust and financial supervisory agencies and tax offices.

If the state fund is tainted by political influence, it will lose the people’s savings and ruin Korea Inc. The national pension is the people’s post-retirement security. Koreans will now closely watch to see if it really protects their savings. They have Kwak to thank for this.