The central bank cut its outlook for Korea’s economic growth in 2018 Thursday as an intensifying trade dispute between the United States and China and slowing exports weighed on the Korean economy. Weak job figures also contributed. 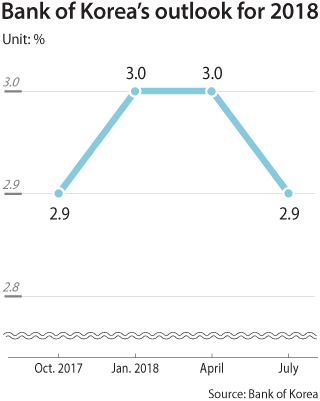 The Bank of Korea (BOK) revised its forecast from 3 percent to 2.9 percent after a monetary policy meeting at which it kept the benchmark interest rate steady. The meeting saw one dissenting vote against the majority as Lee Il-houng, a board member, voted to raise the key interest rate.

BOK Gov. Lee Ju-yeol cited the growing trade row between the world’s two largest economies as a major risk for the Korean economy.

“[The BOK] factored in downside risks such as corporate earnings in the first half and the global trade dispute, along with upside risk factors like the government’s supplementary budget,” Lee said.

“The internal and external uncertainties, including the trade conflict, could have a substantial impact on the Korean economy if fully implemented.”

U.S.-China trade tensions continue to rise as Washington readies more tariffs on $200 billion worth of Chinese goods on top of the two countries’ tit-for-tat tariffs of $34 billion on each other’s goods.

Disappointing jobs statistics and a slowdown in exports also have become a heavy burden.

According to Statistics Korea on Wednesday, Korea’s economy added a total of 106,000 jobs last month compared to a year ago with the total number of employed standing at 27.12 million, far below estimates by the central bank.

Exports, the main engine of the economy, are also losing momentum. Exports declined 1.9 percent on-year during the first 10 days of July, according to data released by Korea Customs Service on Wednesday.

Such risks kept the BOK from following interest rate hikes prevalent in major economies. The central bank lifted the benchmark interest rate last November for the first time in more than six years.

Still, it remains unclear whether the BOK could raise rates in the coming months.

Gov. Lee said that the dissenting vote Thursday would not necessarily translate into a hike next time.

“It’s a bit far-fetched to read the dissenting opinion as an official signal for a rate hike,” Lee said.

Finance Minister Kim Dong-yeon also sent a warning about the state of the Korean economy.

“Employment is the worst it has been since the 2008 financial recession,” Kim said, “The trade dispute can also lead into a slowdown in the global trade market.”

The finance chief cited the steep rise in the minimum wage this year as one of the factors that affected the job market negatively.