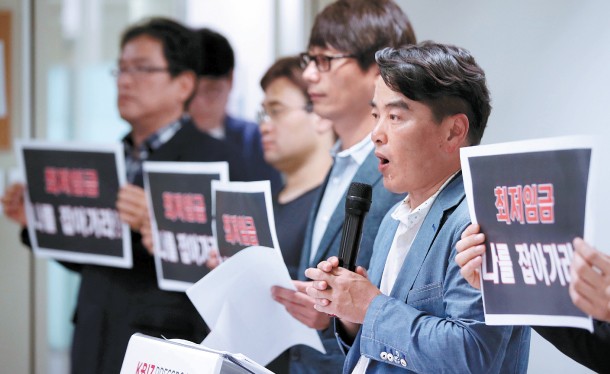 Shin Sang-woo, far right, and other members of an organization representing owners of convenience stores tell reporters about the negative impact of the raised minimum wage on their industry at the Korea Federation of SMEs’ office in Yeouido, western Seoul, Thursday. [YONHAP]

As the controversy over the Moon Jae-in administration’s planned increases to the minimum wage continues, an association of small business owners declared Thursday that they would not comply with next year’s wage hike.

The Korea Federation of Micro Enterprise, which represents small business owners and the self-employed, held a press conference at the headquarters of the Korea Federation of SMEs in Yeouido, western Seoul on Thursday to declare a “moratorium” on next year’s minimum wage increase. The association said its members will pay hourly wages to their employees based on mutual consent rather than the legal requirement.

“The declaration of a moratorium is based on the right of resistance in the constitution, so small business owners can protect their right to survive,” said an official from the federation during the press conference. “We made this decision because [the commission] rejected the proposal to use different minimum wages depending on the industry for businesses with less than five workers.”

The minimum wage commission, composed of representatives of the government, labor and management, on Tuesday voted down the employers’ proposal that would differentiate the legal minimum wage based on industry.

“[The decision by] the commission [on next year’s increase] may make us lawbreakers, but we will not accept the increase,” said Choi Seung-jae, the head of the federation. “We will call an emergency board of directors meeting next week and come up with a plan, including holding a large-scale demonstration as soon as the minimum wage plan passes.”

“We request that the president take charge and not neglect the matter,” Choi continued.

There are some 5.5 million small business owners and self-employed in Korea, according to data from Statistics Korea, and the federation argues that the 16.5 percent increase in the minimum wage that went into effect this year has already taken a heavy toll on their business.

An organization that represents some 70,000 convenience store owners in Korea also made a similar remark on Thursday, saying that it will create a plan of action if store owners think the legal minimum wage reaches a level that they cannot afford.

“If the government does not differentiate [the increase for next year] based on industry and region, we will consider closing down all convenience stores across the country,” said Shin Sang-woo, co-head of the federation, during a press conference on Thursday. Sung In-jae, co-head of the organization, said that labor costs are up to 40 percent of the operating costs of convenience stores, which means that a steep rise may force some stores to close.

“Convenience store owners are already at the point where they take home less money than their employees, and we think many of them will have to close down in the second half of this year,” an official from the organization said. “We are already at our limit.”

“The minimum wage increase had a negative effect on the wholesale, retail, food and lodging sectors,” said Kim Dong-yeon, Korea’s finance minister, on Thursday. “We must be cautious about the target of raising the minimum wage to 10,000 won by a certain year.”

The deadline to decide on next year’s minimum wage increase is tomorrow. The commission is set to hold its 14th plenary meeting today. The 13th plenary meeting took place on Wednesday, but it lasted just 40 minutes after representatives of employers boycotted the meeting.