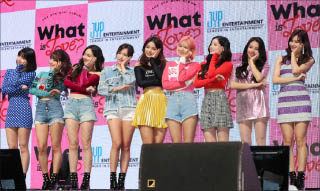 The music video for “Heart Shaker,” released in December, has garnered more than 200 million hits on the biggest video-sharing site as of 8 p.m. on Wednesday, JYP Entertainment said.

Twice now has five singles whose YouTube viewership has surpassed the 200 million threshold, the agency added.

In December, Twice’s 2016 release “TT” made history for garnering more than 300 million hits on YouTube. It was the first time a music video by a female-only K-pop act achieved the feat.

Three other Twice songs - “Cheer Up,” “Ooh-ahh” and “Likey” - exceeded the 200 million mark in August and November last year and March this year, respectively.

Earlier this week, the girl band dropped its latest EP “Summer Nights,” whose lead track “Dance the Night Away” took local music charts by storm immediately after its release.