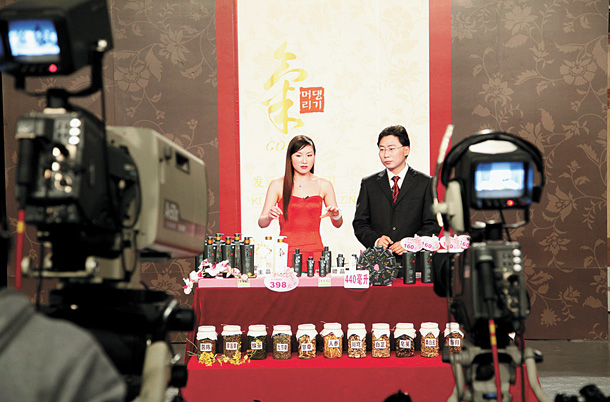 According to a 2014 report from Chinese business news outlet China Industry Insight Network, Chinese people living in urban areas washed their hair 2.5 times a week on average - only half as often as their American and Japanese counterparts.

The recent growth of the Chinese shampoo market, however, indicates that more people in the country of 1.4 billion people are washing their hair. In 2017, the market was worth 57.2 billion Chinese yuan ($8.57 billion), growing six percent on-year since 2014, according to chyxx.com, another Chinese news outlet.

Chinese imports of foreign shampoo have also steadily increased over the last three years, according to a report on the Chinese shampoo market by the Korea Trade-Investment Promotion Agency (Kotra) last month. Chinese shampoo imports last year totaled $183.24 million, an 18 percent increase from 2016. 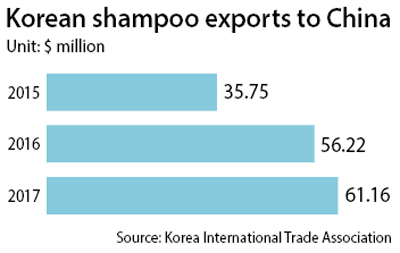 Because shampoos are not seen as a necessity like food or clothing, their demand is closely tied to a country’s economic development. With China’s rising per capita income and consumer purchasing power, shampoo sales have also been growing quickly.

Amid the boom in the market, the popularity of Korean shampoo imports is soaring despite China’s economic retribution against Korea over its installation of a U.S. antimissile system.

Last year, China imported $61.16 million worth of shampoos from Korea, up from $35.75 million in 2015. Korean imports topped all foreign shampoo imports to China over the last two years.

According to the Kotra report, China mainly imports Korean shampoos through Shanghai and the provinces of Zhejiang, Henan and Guangdong. The growing demand for Korean shampoo made Henan, home to the logistics center of an e-commerce firm, a huge importer of Korean shampoos starting in 2015.

Functional shampoos that help with specific hair conditions such as dandruff and oily hair are particularly popular with Chinese consumers. Among Korean shampoo brands, those advertised as providing hair nutrition and protection like Amorepacific’s Ryo and LG Household & Health Care’s Reen brands were the best-selling.

Chinese consumers are also buying more shampoos without harmful chemicals. Last year, shampoos that didn’t contain silicone oil accounted for 39 percent of total shampoo sales. Health-conscious consumers avoid silicone oil, known for its ability to coat and condition hair, because it’s not easily soluble and is likely to attract pollutants from the air.

“The rise of luxury products in the market for personal hygiene items in China is inevitable,” said Zhu Sheng-geng, a professor of biochemistry and molecular biology at Beijing University.

There are still some barriers to entry that Korean businesses face when selling shampoo in China, though.

“Because shampoos are categorized as cosmetics, they need to go through inspection and quarantine procedures before being imported into China,” said Kim. “It may take companies up to a year to get approval for their products from the Chinese Food and Drug Administration.”