The Volvo XC40 has a convenient hook attached to its glove compartment, one of its space-saving features. [VOLVO KOREA]

NAMYANGJU, Gyeonggi - Many Koreans are in love with the sleek lines of Scandinavian design, and Volvo’s capitalized on this to become one of the fastest-growing imported car brands in the country.

The XC40, the Swedish carmaker’s first-ever compact SUV, was unveiled in Korea at the end of June. It’s set to continue the momentum of its bigger siblings, the XC60 and XC90, as Volvo Korea said it already received over 1,000 preorders for the XC40. 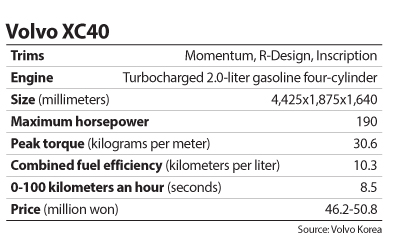 The Korea JoongAng Daily recently test-drove the XC40 along a route in Gyeonggi from Namyangju to Yangpyeong County, and back to Seoul. Two reporters took turns each driving two different gasoline trims -the basic Momentum and mid-range R-Design - for the 235-kilometer (146-mile) journey.

The Volvo’s exterior inherits the clean, minimalist design aesthetic of the XC60 and XC90, but the XC40 is based on a new space-efficient platform called compact modular architecture. That platform, combined with the XC40’s relatively long 2.7-meter wheelbase, made it feel more spacious behind the wheel than other small SUVs.

The XC40 can accelerate from 0 to 100 kilometers per hour in 8.5 seconds, similar to Volkswagen’s Tiguan, a major competitor. The vehicle’s decent acceleration allowed this reporter to nimbly shift between lanes.

The pedals didn’t require much pressure, and the steering was smoother than expected. It didn’t drive like a stereotypical luxury vehicle, an indication that Volvo is aiming for younger, trendier buyers.

Volvo is targeting the XC40 at urban drivers, both with its design and unique Pilot Assist driver assistance technology. The clever semi-autonomous driving feature combines adaptive cruise control with steering assistance, and helps keep the SUV in its lane and a safe distance away from the vehicle ahead of it.

The technology works best on dry highways with clear lane lines and at a speed of between 15 to 140 kilometers per hour. It’s optimal for highly congested straight-ahead lanes that require a lot of braking.

The curvy, mostly two-lane countryside road chosen for the test drive wasn’t exactly the best circumstance to try out the feature. The futuristic, semi-autonomous technology also required a lot of courage and confidence in the vehicle for this driver of a 12-year-old conventional sedan.

After several tests of the system, though, it became clear how the XC40 was controlling the speed and lane placement according to road conditions. But this reporter never became fully comfortable with the Pilot Assist technology, which took quite a bit of getting used to. The XC40’s biggest asset is its sophisticated and functional interior. Volvo said its designers conducted in-depth research into maximizing the use of interior space.

The outcome is more than impressive. The XC40 features a number of useful nooks - a small, removable waste bin in the front arm, a response to the driver’s habit of cramming garbage into any space available in the car; a compartment under the driver’s seat that offers extra storage space; and a Qi wireless charging tray located in the center console below the display. The charger is only compatible with Apple’s latest iPhone 8 and X and recent Samsung Galaxy models, however.

Even more convenient is the fold-out hook beneath the glove box, which can hold a purse, shopping bag or takeout food, and the center touchscreen display that is tilted toward the driver’s seat.

Perhaps owing to Volvo’s commitment to minimalist design, the interior features and user interface is sometimes confusing. The emergency light switch is much smaller than those of other vehicles and is located beneath the left side of the center display, which may make it hard to find in urgent situations. The small gear shifter was also awkward to use.