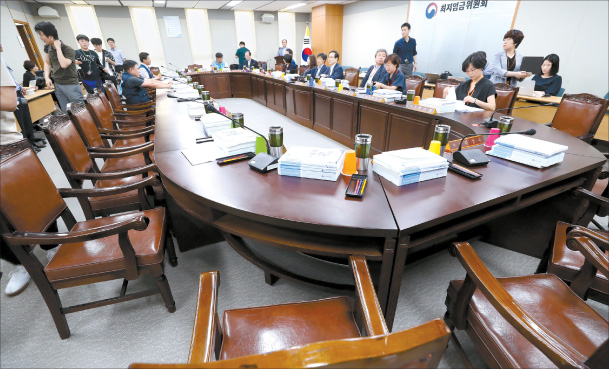 Seats for the business representatives on the Minimum Wage Committee remain empty at the government complex in Sejong on Friday. [YONHAP]

While traditionally it’s the labor union representatives that walk out on minimum wage negotiations, on Friday it was the business side of the table that was left on empty.

All nine members that represent business on the 27-member Minimum Wage Committee refused to take part in the negotiations to decide next year’s minimum wage on Friday.

Four representatives from labor unions and eight from the government attended the meeting.

The deadline for the decision - already pushed back from last month - is today.

The business side of the negotiation table has demanded that a different minimum wage should be applied accordingly to the size of the business and its unique character. They have raised the issue that many businesses with less than five employees have been suffering due to the sharp rise in the minimum wage.

However, this demand has not been approved by the other members.

Small businesses say that the higher minimum wage is not only killing their businesses but also their livelihoods.

An organization representing some 70,000 convenience store owners claimed that the average profit that the owners took last year was 1.95 million won ($1,722.11) a month. This has fallen to 1.3 million won after the minimum wage was raised 16.4 percent this year.

But under the current 7,530 won per hour minimum wage, an employee that works 209 hours a month takes home just 1.57 million won.

“It’s ridiculous that part-time employees make more than the owner,” said Kae Sang-hyuk, a representative of convenient stores. “I want a world where everyone can live.”

The complaint from the business side stems from the labor union’s demand to immediately raising next year’s minimum wage to 10,000 won per hour.

Labor unions have argued that since the newly reformed minimum wage regulation that includes bonuses and welfare payment reduces the effect of the hiked wages, the negotiations should start not from this year’s wage of 7,530 won, but rather from 8,110 won.

The government urged the business representatives to return to the negotiating table.

“The business representatives have to return to the negotiations in order to reflect the positions of small businesses and merchants that are affected by the minimum wage while helping decide the minimum wage to a rational level that would consider the current job market, the economic situation and distribution of wealth,” the Ministry of Employment and Labor stated in a statement released yesterday.

Recently, the government has also been taking a different view on the minimum wage.

Until last month President Moon Jae-in lauded the minimum wage hike for having a positive impact on the Korean economy. However, this comment sparked controversy especially since the data told a very different story.

The recent job figures were not only disappointing, but due to external factors such as the trade war between the U.S. and China, which is expected to spill over to Korea’s exports, the Bank of Korea lowered its forecast for this year’s growth from 3 percent to 2.9 percent.

Finance Minister Kim Dong-yeon, who earlier cautiously hinted at the need to decelerate the minimum wage hike, recently spoke out on the negative impact of the higher minimum wage, stating that it has had a negative influence on the job market, especially in the service sector, which is mostly made of restaurants and lodging services.

Despite the boycott from the business representatives, the government and the labor union could still decide next year’s minimum wage as long as it passes on to the Employment and Labor Minister, who will announce the minimum wage on Aug. 5.