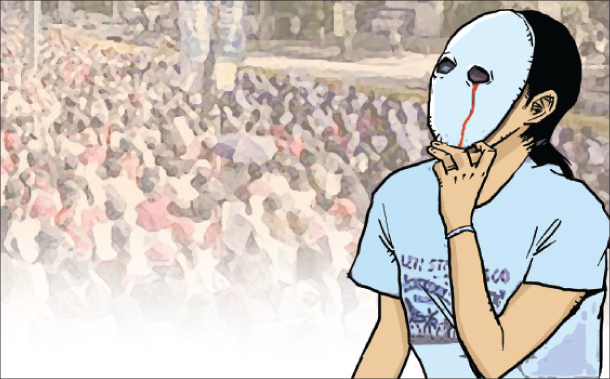 SONG WU-YOUNG
The author is a national news reporter at the JoongAng Ilbo.

On Tuesday, a member of Womad, an online radical feminist group, posted images of a burning sacramental wafer with expletives against Jesus and comments deriding Catholicism as misogynistic. The next day, Catholic bishops issued a statement denouncing the act. Womad members responded in kind with another image of a blood-stained sacramental wafer and vowed to burn down one church in Korea every Sunday.

As the public learns of Womad’s activities, the group is becoming more radical and controversial, opening the general idea of feminism to criticism. In online forums, there are countless comments like “We are witnessing the downfall of feminism” and “Womad is not about feminism.” Whether you call them radical feminists, man haters or female chauvinists, Womad has stirred Korean society in a remarkably short period of time since its founding in 2016.

The regrettable consequence of Womad is that it warps people’s perspectives on feminism. Its tactics are distant from feminism’s essence. At three women’s rallies near Hyehwa Station in central Seoul, there were so many participants that even police officers there were surprised by the numbers. These rallies drew attention to women’s rights and gender inequality. I thought about the discrimination my female colleagues, my sister who is awaiting a decision on her promotion and the daughter I might have in the future may face.

However, I don’t buy the argument that police investigations are unfair toward women, even though most officers are men. I don’t think the women who insult and curse the president only to make lame excuses later deserve our attention. There is no reason to believe that the deviation of some radicals outshines the essence of the issues, but if such radical expression of hatred continues, more people will suspect the intentions of those women protesting at Hyehwa Station.

Newspapers are using the word “mirroring” to describe Womad’s misandrist acts, but the essence of mirroring is putting oneself in another’s shoes. Instead of succumbing to the joy of putting down men in the same way that women have suffered, Womad should encourage reflection and remorse from all of society. It will be hard, but we can take a step forward through this process. Hatred will only beget more hatred.