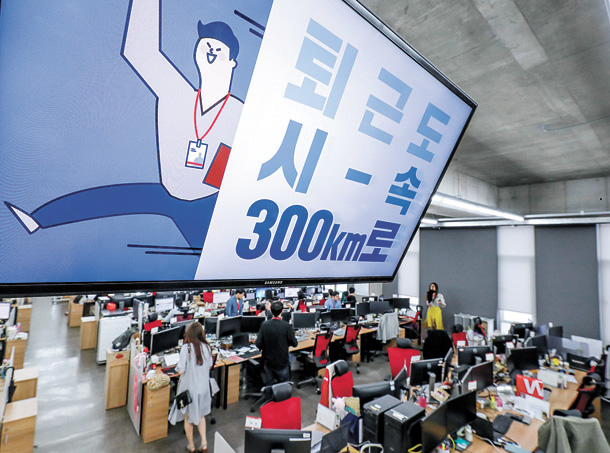 A cartoon telling employees to leave the office after working hours at the maximum speed of 300 kilometers per hour, equivalent to that of the KTX, appears on a display monitor at e-commerce company WeMakePrice’s headquarters in Gangnam, southern Seoul on July 2, the official day that the 52-hour workweek was implemented. [YONHAP]

“With the rise of the Me Too movement and companies adhering to the 52-hour workweek this year our sales dropped to a third of what we used to earn before,” said the owner of Opera&.


Many nighttime businesses that used to light up Seoul’s streets after working hours are now closing down.


“Stores are out of business because the culture of office workers staying out all night is disappearing,” said Prof. Jung Yeong-sung, who teaches business administration at Dankook University. “Store owners are also facing increased labor costs due to the minimum wage rise.”


In contrast, the production index for non-alcoholic beverage businesses like cafes jumped from 86.5 points to 129.4 points during the same period. 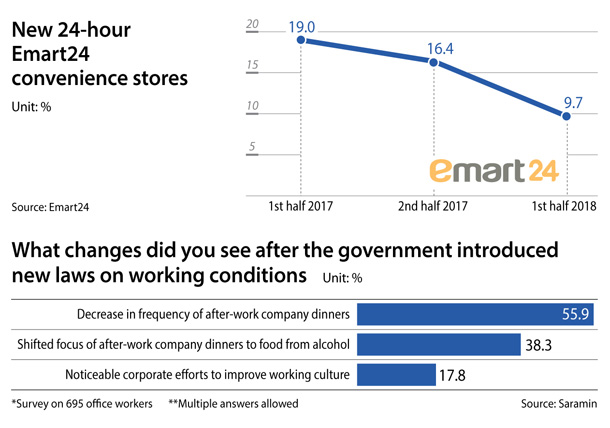 “Though we used to open until 1 a.m. just two or three years ago,” said an employee at a barbeque restaurant in Gwanghwamun, another key business district in central Seoul, “we close down at 11 p.m. even on Friday nights now because there aren’t any customers.”

“There are around 20 to 30 percent more nighttime businesses coming to consult us on closures compared to last year,” said Ko Kyung-soo, CEO of Closing 119, which helps small businesses close down with minimal financial losses. “Because these closures are occurring in key commercial areas where many office workers and pedestrians pass by daily, they may be a sign of a worsening economy.”

Besides restaurants, many fast food outlets like Burger King and Lotteria are bringing their 24-hour business model to an end and closing early.

The production index for motels and other accommodation businesses also hit a 10-year low for this year’s first quarter at 94.5 points.

Several factors account for the declining popularity of nighttime businesses.

Conglomerates, in preparation for the 52-hour workweek that went into effect from this month, began allowing workers to go home earlier from this year. The rising trend of large companies promoting workers’ work-life-balance to demonstrate a progressive, worker-friendly corporate culture has also led office workers to feel less obligated to attend after-work company dinners even when they’re organized.

Social changes have made workers wary of after-work company dinners too. Since the Me Too movement early this year and the antigraft law in 2016, office workers have become cautious of creating situations where they may be accused of conducting activities perceived as sexual harassment or bribery.

Store and restaurant owners, facing low demand and higher labor costs from the minimum wage rise are forced to either close earlier or shut their doors for good.

“As the population of consumers and economically-active individuals decreases in Korea,” said Prof. Suh Yong-gu, who teaches marketing at Sookmyung Women’s University, “nighttime businesses have been the first to suffer.”

The phenomenon of nighttime business closures is particularly concerning because Korea has one of the highest numbers of self-employed people in the world. Closing businesses down or shortening working hours can hurt both store owners and employees, leading to higher unemployment rates and a weakened economy.