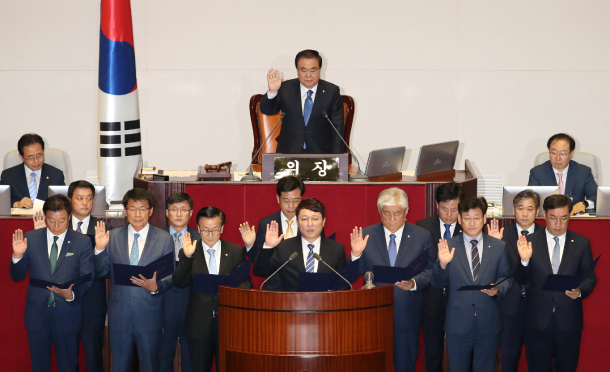 Moon Hee-sang, a lawmaker from the Democratic Party, waves after his election to National Assembly speaker on Friday. [YONHAP]

The National Assembly elected a new speaker on Friday after lawmakers agreed earlier this week to end more than 40 days of gridlock.

Lawmakers approved Moon Hee-sang, a six-term lawmaker from the ruling Democratic Party, to be speaker for the second half of the 20th National Assembly’s four-year term. Lee Ju-young of the main opposition Liberty Korea Party and Joo Seung-yong of the minor opposition Bareunmirae Party will be the two vice speakers.

“We should not forget the grim reality that people will hand down judgment on lawmakers if they are only embroiled in confrontations and tensions and leave parliament in a deadlock,” Moon, 73, said. “What should be a priority is seeking cooperation among parties.”

On Tuesday, lawmakers reached an agreement on the legislature’s new leadership and the distribution of 18 standing committees. The former speaker’s two-year term ended in May, but the parties were only able to begin consultations on the committee arrangements in late June because opposition parties were reeling from a resounding defeat in the local elections on June 13.

In accordance with custom, the ruling party took the position of speaker while the vice speaker posts went to the second and third-largest parties. The Democratic Party will chair eight committees, while the Liberty Korea Party will lead seven and the Bareunmirae Party two. A negotiating bloc with two minor parties will lead one committee.

On Monday, the National Assembly is set to open a plenary session to elect the chairs of the standing committees and vote on a bill to separate the committee on education, culture, sports and tourism into two - one for education and the other handling the rest.

The legislature has been sitting on a pile of bills in its month-long gridlock. In a meeting with the Democratic Party’s floor leader on Thursday, Finance Minister Kim Dong-yeon urged the National Assembly to pass key bills relating to economic policy.

The June jobs report was a sobering one, with job growth remaining around 100,000 for a fifth straight month. The figures are the worst since the 2008 financial crisis.

The Democratic Party also plans to lobby opposition parties on a declaration of cooperation signed by the two Koreas’ leaders after their summit in April. The ruling party’s goal is to ratify the declaration or at least seek a resolution expressing support. In May, the National Assembly failed to adopt the resolution because lawmakers differed on the wording regarding North Korea’s denuclearization.

During a 14-day extraordinary session that kicked off on Friday, the National Assembly will also hold confirmation hearings for the national police chief designate and three Supreme Court justice nominees.