How to celebrate the March 1 Movement’s 100th year

How to celebrate the March 1 Movement’s 100th year 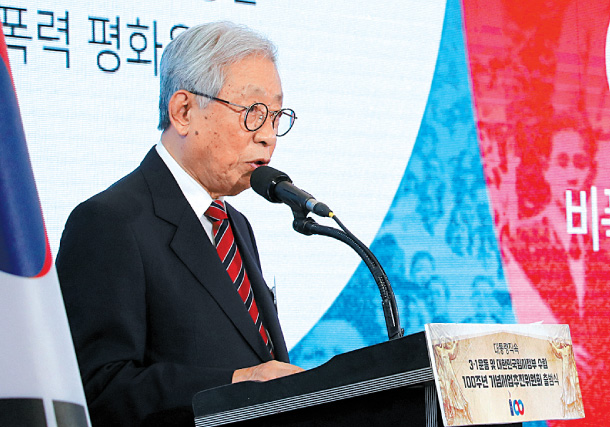 Han Wan-sang, chairman of the presidential committee to plan the 100th anniversary of the March 1 Independence Movement, speaks at its inauguration ceremony at the Culture Station Seoul 284, the old Seoul Station in Jung District, central Seoul, on July 3. [YONHAP]

On July 3, Han Wan-sang, former deputy prime minister for unification and education, was made chairman of a presidential committee to plan the 100th anniversary of the March 1 Independence Movement in 1919 and the establishment of Korea’s provisional government in exile. During an interview with the JoongAng Ilbo, he said that the committee will “not only plan the 100th anniversary project but also reshape Korean identity.”

Q. How did you come to prepare for the project with North Korea?

A. The March 1 Independence Movement is the bedrock of Korean sovereignty. President Moon Jae-in said to [North Korean leader] Kim Jong-un that sharing such values would strengthen the emotional bond between the two Koreas at their summit on April 27.

Why does President Moon think this will change mainstream culture?

The president knows that democratizing politics and the economy is impossible when the two Koreas are in conflict with each other. So far during antagonistic eras, democratization, labor movements and human rights movements were labeled communist and restricted.

Many people are still suspicious about the effectiveness of denuclearization and peace policies.

No matter how well we get along with North Korea, we can’t do much without a good relationship between North Korea and the United States. The joint declarations in 2000 and 2007, which were merely between the two Koreas, didn’t amount to anything because there was no support from the United States. We’re in an entirely different time now.

Could there be a joint celebration of Liberation Day [on Aug. 15]?

Aug. 15 is a sad day in our history. Was that really liberation? A true liberation would have seen both Koreas celebrating together, but we were divided immediately and started firing at each other. As of now, we’re only preparing for the March 1 celebration next year.

Rumor has it that you selected committee members with cooperation with the North in mind.

We screened for two factors: ethics, including accusations of sexual harassment, and a history of being pro-Japanese. Having any pro-Japanese people could pose problems with the North.