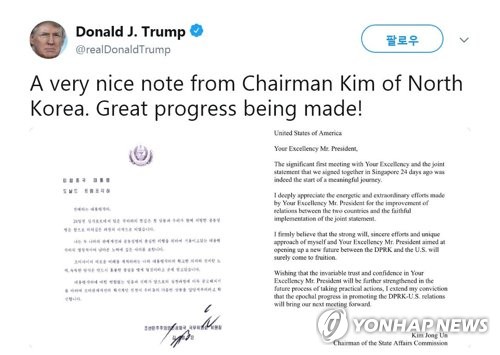 The United States and North Korea have agreed to hold talks Sunday to discuss the repatriation of American troops' remains from the 1950-53 Korean War, a U.S. State Department spokeswoman said.

Heather Nauert said in a statement that the North Koreans proposed the date Thursday after a meeting expected the same day failed to materialize.

"Vice Chairman Kim Yong-chol agreed in his dialogue with Secretary Pompeo to have his team meet with an American team in Panmunjom on or around July 12th to move forward with the repatriation of American service members' remains," the spokeswoman said. "Mid day July 12th they contacted us and offered to meet on July 15th. We will be ready."

Panmunjom is a village on the inter-Korean border.

North Korean leader Kim Jong-un agreed to the repatriation in his historic summit with U.S. President Donald Trump last month. And last weekend U.S. Secretary of State Mike Pompeo flew to Pyongyang to follow up on that and other agreements, including North Korea's commitment to the "complete denuclearization" of the Korean Peninsula.

Pompeo said after meeting with Kim Yong-chol, a close aide to the leader, that their talks were "productive" but that a lot of work remained to be done.

About 200 sets of remains are expected to be returned through the inter-Korean border to the United Nations Command (UNC), which oversees the cease-fire that ended the Korean War.

U.S. Defense Secretary Jim Mattis said earlier that the UNC would receive the remains, not the South Korean or U.S. militaries alone, because all 21 nations that fought under the U.N. flag alongside South Korea and the U.S. lost troops in the conflict.

There was widespread speculation that Pompeo would return with the remains following his visit to Pyongyang, but that did not happen.
Once the remains cross the inter-Korean border, they will be moved to the U.S. air base in Osan, south of Seoul, and then to Joint Base Pearl Harbor-Hickam in Hawaii for forensic identification.

The level of the meeting Sunday was not immediately known.

North Korea has reportedly proposed holding general-level military talks with the UNC over the repatriation of remains, sources here said Thursday, after it failed to show up at the meeting earlier that day.

With the meeting not taking place, the UNC reportedly made a phone call and North Koreans responded by saying that they needed to upgrade the "level" of the talks.

"North Korea apparently wants a U.S. general to appear at the table to quickly finalize the repatriation issue," the source said. "It is likely that military generals from the U.S. and North Korea will take part in the meeting."

If realized, they will be the first general-level military talks between North Korea and the UNC since March 2009.

Meanwhile, Trump on Thursday revealed a letter from Kim Jong-un that expressed hope for further progress in bilateral ties.

In a Twitter message, Trump wrote, "A very nice note from Chairman Kim of North Korea. Great progress being made!"

Attached were two images of the letter -- one in Korean and the other an English translation. Dated July 6, the note was likely the one given to Pompeo during his visit to Pyongyang last week.

"I deeply appreciate the energetic and extraordinary efforts made by Your Excellency Mr. President for the improvement of relations between the two countries and the faithful implementation of the joint statement," the letter read, referring to an agreement the two leaders signed at their summit in Singapore last month.

"I firmly believe that the strong will, sincere efforts and unique approach of myself and Your Excellency Mr. President aimed at opening up a new future between the DPRK and the U.S. will surely come to fruition," it added, using the acronym for North Korea's official name, the Democratic People's Republic of Korea.

"Wishing that the invariable trust and confidence in Your Excellency Mr. President will be further strengthened in the future process of taking practical actions, I extend my conviction that the epochal progress in promoting the DPRK-U.S. relations will bring our next meeting forward."

In the joint statement, Kim committed to work towards the "complete denuclearization" of the Korean Peninsula in exchange for security guarantees from the U.S. Pompeo traveled to Pyongyang over the weekend to try to flesh out the deal, but apparently left with few tangible results. He later described his meetings with North Korean officials as "productive," while acknowledgnig that a lot of work remained to be done.

North Korea watchers downplayed the significance of the letter.

"It is in keeping with the North Korean approach to the talks with the U.S. Instead of focusing on CVID, as the U.S. would prefer, North Korea prefers to focus on building good relations and confidence building measures, which at some point in the future will lead to more stable relations and possibly a peace treaty," Ken Gause, a North Korea expert at CNA Corp., said in emailed remarks to Yonhap, referring to a peace treaty that would formally end the 1950-53 Korean War.

Speaking hours earlier at a press conference in Brussels, Belgium, Trump pointed to North Korea's suspension of nuclear weapons and ballistic missile testing in the past eight months as a sign of progress in efforts to denuclearize the regime.

"The decision to praise the letter seems more concerned with politics and pride than substantive progress with North Korea," said Adam Mount, a senior fellow and director of the Defense Posture Project at the Federation of American Scientists, where he covers North Korea.

"Actual progress requires supporting the negotiators working to hammer out an agreement, including our allies. It is bizarre to claim progress in a week when U.S. teams have been ignored and insulted by North Korea," he said in an email.

"Kim Jong-un is discovering that he can slow negotiations to a crawl so long as he placates the president, which is exactly the wrong message to send," Mount said. "Progress will be impossible so long as the president praises obstruction."