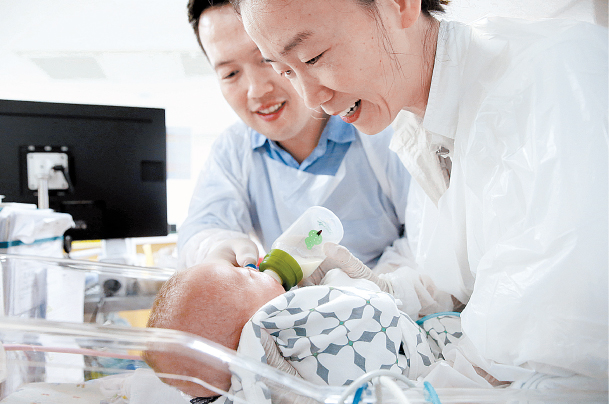 Lee In-seon, right, and Lee Chung-gu feed breast milk to their baby, Sa-rang, at Asan Medical Center in southern Seoul on Thursday. Sa-rang was discharged from the hospital that day after nearly six months of intensive care. [ASAN MEDICAL CENTER]

Korea’s smallest newborn is home with her family after nearly six months of intensive care.

Lee Sa-rang, born on Jan. 25, was about the size of an adult’s hand. The mother, Lee In-seon, was less than six months into her pregnancy when doctors at Asan Medical Center in southern Seoul had to perform a C-section to prevent pregnancy complications from harming the mother and child.

When Sa-rang was born, she weighed 302 grams (10 ounces), was 21.5 centimeters (8.5 inches) tall and had premature lungs. Her chance of survival was less than 1 percent.

Doctors quickly moved Sa-rang to the neonatal intensive care unit, where they spent the next few nail-biting months bringing the extremely premature baby to full health. The treatments were successful, and on Thursday, Sa-rang was allowed to leave the hospital with her parents.

“We never lost hope that she would survive,” her mother said.

Premature babies like Sa-rang who weigh less than 1 kilogram are usually born with underdeveloped organs and face various complications that pose risks to their short- and long-term health. Because Sa-rang was born with premature lungs, she could not breathe properly.

In those first moments after her birth, doctors were barely able to save her through CPR. Afterward, they inserted a synthetic lung surfactant to her bronchus and connected her to a high-frequency mechanical ventilator, both medical devices that would help her breathe.

A week later, Sa-rang had another brush with death. Her body expelled its remaining amniotic fluid, and her weight dropped to 295 grams. Doctors advised the parents that breast milk would prevent Sa-rang from getting necrotizing enterocolitis, a medical condition in which a portion of the bowels stops functioning.

Lee In-seon immediately went to work and began producing breast milk every day. Her husband, Lee Chung-gu, brought the milk to the ICU. Soon, the baby weighed 600 grams and no longer needed a medical ventilator.

The doctors had to be careful when administering IV injections because even the smallest needle was the size of Sa-rang’s arm. She could not afford to lose even a few drops of blood.

With the IV injections and breast milk, Sa-rang’s weight and health stabilized. “I can still remember the intense surge of emotions when Sa-rang showed her first tears,” her father said.

The doctors credit the parents’ devotion for bringing Sa-rang to full health.

“When I saw this baby that wasn’t even as big as the palm of my hand desperately grasp for air, only one thought came into my head - I had to do everything I could to save this baby,” said Jung Eui-seok, the lead doctor on the team. “I first-handedly witnessed the strength of humanity when I saw Sa-rang overcome every difficult stage along her treatment process.”

According to Asan Medical Center, 33 extremely premature babies were born in the hospital in the past five years and 52 percent survived.