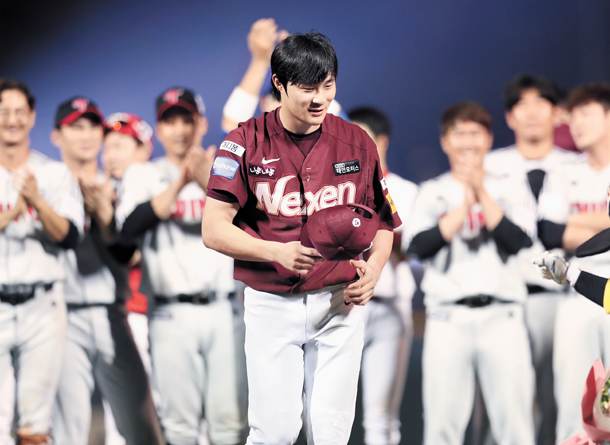 For the first time in four years, the Nanum Team defeated the Dream Team 10-6 at the annual KBO All-Star Game at Munsu Baseball Stadium in Ulsan on Saturday.

The Nanum team was first to take the lead at the top of the second inning, after Jared Hoying of the Eagles hit a solo home run. Yoo Gang-nam of the Twins later hit a two-run home run in the second inning to give Nanum a 3-0 lead. Kim Ha-seong of the Heroes and An Chi-hong of the Tigers each hit solo home runs in the third and the fourth innings to extend their lead to 5-0.

The Dream team started to respond in the sixth inning. It all started after the Wiz’s Kang Baek-ho took the mound.

Though Kang is an outfielder in the KBO, Kang proved his pitching skills during the All-Star game.

When Kang was first drafted by the Wiz last year, many speculated about what position he would play, as he also pitched while playing for Seoul High School.

He got on the mound in the top of the sixth inning and struck out Oh Ji-hwan of the Twins and Lee Yong-kyu of the Eagles, and threw a fastball that reached 148 kilometers (92 miles) per hour.

After striking out two batters, Kang moved back to left field.

But the tie didn’t last long, as the Nanum team scored two runs at the top of the seventh inning to extend their lead.

In the bottom of the seventh, pitcher Jang Pil-joon of the Samsung Lions, too, debuted as a batter, but grounded out.

While the Nanum team was leading 7-5, Kim once again extended the team’s lead with a three-run home run in the top of the eighth to make the score 10-5.

With his two home runs, Kim was named the MVP, receiving 26 out of a total of 52 votes, one vote more than Hoying. Kim scored three runs, had four RBIs and walked once.

“I’m really happy to receive such great awards at this event,” Kim said after the game. “I was in good condition since preparing for the perfect hitter [contest]. I thought I wouldn’t have a chance against [Jared] Hoying, so I was very surprised.”

Kim took home a midsize sedan and a MVP trophy in addition to prize money of 3 million won from the perfect hitter contest. Though Hoying just missed the MVP award, he was named the best hitter of the game. Hoying hit one home run, drove in two RBIs and scored two runs.

Lee Dae-ho of the Lotte Giants won the home run race for the first time in nine years.

After the All-Star Game on Saturday, the KBO will start the second half of the season tomorrow. The fight for the fifth spot in the standings, which is also the last postseason spot, is likely to be the most competitive.

The top three teams - the Bears, Eagles and the Wyverns - are in a good position, as they have solid leads on the fifth-ranked team, the Heroes. As the fifth to eighth ranked teams are only five games apart, the last postseason spot will likely trade hands numerous times before the end of the season.