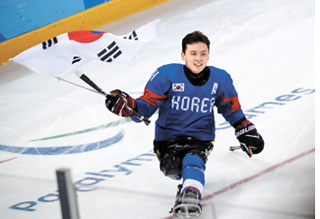 Jung Seung-hwan celebrates with the national flag after Korea won a bronze medal at the PyeongChang Winter Paralympics on March 17. [YONHAP]

Jung has been training with the national para Nordic skiers since Wednesday in PyeongChang, Gangwon, the host city of the 2018 Winter Olympic and Paralympic Games. The 32-year-old isn’t a national team member, but joined as a trainee to learn para Nordic skiing skills.

“Jung needs time to switch from ice sledge hockey to Nordic skiing,” said Kim Kwang-rae, a coach for the national para Nordic skiing team. “He needs to earn his firearms license for shooting and also has to do exercises to improve his endurance.”

Kim said he believes Jung will quickly learn the sport.

“Jung will probably compete in short distance events in cross-country skiing and sprint events in biathlon,” he said. “He is known for his pace, so even if he started this sport late, I think he can catch up to other athletes quickly.”

Jung lost his right leg at the age of five after construction pipes collapsed on him. He became one of the most effective forwards in the para ice hockey world after starting the sport in 2004.

He was named the best forward at the World Championships three times and with his pace and skills, Jung has been dubbed “[Lionel] Messi on the ice” by his fans.

At the PyeongChang Paralympics in March, Jung assisted Jang Dong-shin’s winner in Korea’s 1-0 win over Italy in the bronze medal match. With the victory, Korea claimed its first ice sledge hockey medal at a Winter Paralympic Games.

After the Paralympics, Jung said he wanted a new challenge in his career and decided to switch to snow sports. In May, he quit his sledge hockey team with the Gangwon Provincial Government and joined a para Nordic skiing team run by Changsung Engineering & Construction, where Sin Eui-hyun, the first Korean Paralympic gold medalist, also plays.

“It’s a new sport for me, but I want to enjoy it,” Jung said. “I will give my best effort to win a gold medal at the 2022 Beijing Winter Olympics.”

Jung has been focusing on improving his stamina and endurance, both requirements for a para Nordic skier, at a gym since adverse weather in PyeongChang prevented outdoor training. His team will travel to Finland next month and Jung can work on his skiing techniques there.

“My first goal is to pass the national team selection trial,” he said. “Then I’ll try to win medals from international competitions before I go for the gold medal at the Beijing Paralympics.”