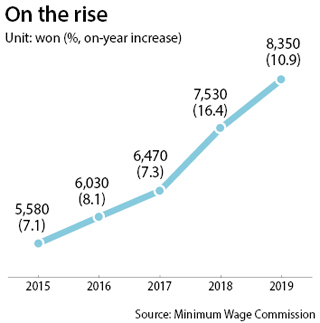 The minimum wage will be raised by over 10 percent next year, a decision that pleased just about nobody.

“We cannot accept the unilateral decision by the Minimum Wage Commission on the minimum wage increase for 2019,” said the Korea Federation of Micro Enterprise in a statement over the weekend, who thought it was too high. The federation represents small business owners and the self-employed.

“The government and the commission neglected the desperate cries of small business owners who have reached their limit [in terms of affording to pay the legal wage],” said the federation.

The Minimum Wage Commission, a body that’s comprised of representatives of the government, workers and employers decides the minimum wage increase each year. It decided on Saturday to raise the base salary for 2019 by 10.9 percent from this year to 8,350 won ($7.40). As a result, the monthly wage for a person who works 40 hours a week will go up from 1.57 million won this year to 1.74 million next year.

This is the first time that the legal hourly wage has gone above 8,000 won.

“According to a report by the Korea Labor Institute, a 10 percent increase in minimum wage would in effect have 2.2 percent increase for laborers,” said the the Korean Confederation of Trade Unions, an umbrella union group. It condemned the decision and accused the administration of deceiving workers.

“The government and the ruling party have essentially given up on their income-led growth policy.”

Saturday’s decision was made without representatives of companies, who boycotted the meeting after its request that the minimum wage be set at different levels for different industries was turned down. Without the employers, the government and workers’ representatives voted on two options - 8,350 won as proposed by the former and 8,680 won by the latter. The companies had requested the minimum wage to be frozen at the current rate of 7,530 won.

The Korea Federation of Micro Enterprise argued that 29-percent growth in the minimum wage in the past couple of years has threatened the existences of many small businesses. It also said that the earnings gap between the self-employed and those working for large companies will be widened.

“It’s disappointing that the minimum wage for 2019 saw a double-digit increase despite concerns by the business community about the difficult conditions for small business owners and sluggish employment,” said the Korea Chamber of Commerce and Industry in a statement.

The nearly-11-percent increase in base salary was made amid worsening employment conditions in Korea as highlighted by recent data.

Data released by Statistics Korea last week showed that the Korean economy added a total of 106,000 new jobs in June, the fifth month in a row that the figure remained below 200,000, which translates into the worst job situation since the 2008 global financial meltdown. The weakness in jobs was especially notable in sectors such as food and lodging, sensitive to changes in the minimum wage. Non-government analysts and even Kim Dong-yeon, who is the country’s finance minister and top economic policymaker, said this was partially the result of the rise in the minimum wage.

An association that represents some 70,000 convenience store owners in Korea called on the government to come up with practical measures to reduce their burden, such as decreasing credit card fees, and to address unfair contracts imposed on the store owners by franchise headquarters.

The association added that convenience store owners took home about 1.95 million won per month on average last year, which fell to about 1.30 million won per month this year in the wake of the over-16-percent increase. With the situation likely to get worse because of Saturday’s decision, the owners are considering some drastic solutions such as closing down stores at night.

Yoon Young-seok, spokesman of the main opposition Liberty Korea Party (LKP), said on Sunday through an official statement that the dramatic increase in the minimum wage over the past two years is a result of the government trying to “forcibly meet a pledge by the president to raise the minimum wage to 10,000 won by 2020 as a part of his income-led growth policy.”

The LKP said the government should consider the economic and employment conditions in the country and whether employers would be able to pay the legal wage and scrap such “anti-market” policies entirely.

Shin Yong-hyeon, spokeswoman for the Bareunmirae Party, said in a statement that the government has ignored the outcry of the small business community and that the decision will bring doom to its income-led growth policy.

“Everyone knows that increasing the minimum wage is a proper policy but we cannot condone an irresponsible hike that could jeopardize the country’s economy,” said the spokesperson.

Proponents of the minimum wage increase denounced the decision as a failure by the government to keep its promises.

The 10.9-percent increase is substantially lower than what they anticipated - about a 15-percent-hike, which is a must if the government is to meet the 10,000-won minimum wage pledge made by President Moon Jae-in by 2020.

“The government and the ruling party should not be talking about slowing down the pace of the increase but rather, how it could tackle issues such as the unfair trading between conglomerates and small- and mid-sized companies,” the group said.

Amid all the criticism, there was no official statement made by the Blue House on Sunday.