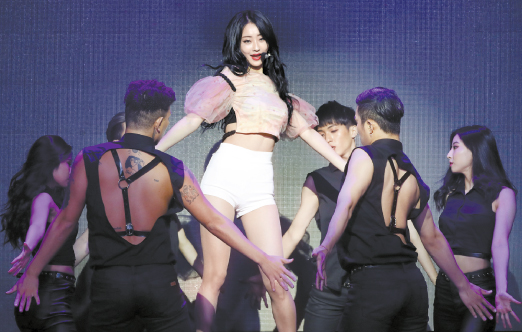 Gyeongree, one of the longest-running members of the K-pop female act Nine Muses, set out on a fresh music career path with the release of her first solo single “Blue Moon” earlier in July.

Debuting initially as a nine-member band in 2010, Nine Muses has seen their lineup constantly change over the years and now stands as a five-member act. Gyeongree joined the group in January 2012 and has since figured prominently.

But the group’s continuous shakeups and the seven years she has spent in the hectic K-pop scene put her in a bit of a mental slump.

“Whenever the team had signs of taking off, one or two of the members left the team. I had an especially hard time in 2015 when we were doing the EP ‘Drama,’” Gyeongree said in an interview with Yonhap News on Thursday.

“I told myself, ‘This album really did well. We would be far better off if we take this chance and release one more.’ But I couldn’t intervene (to make some members stay) because they have their own separate lives.”

She herself has also been offered contracts with other talent agencies, but she renewed her contract with her current agency Star Empire Entertainment in February out of a desire to stick with Nine Muses.

The girl band is currently preparing to release a new record sometime in July or August.

“This year, I turned 29. I wanted so much to drop my own solo album before turning 30,” Gyeongree said. “Some agencies suggested I launch an acting career, but right now, I have no interest in acting. I like singing and performing as a member of Nine Muses.”

Indeed, the release of her first single “Blue Moon” on July 5, her birthday, offered a turning point in her seven-year music career.

“I had been in a slump. I was afraid about whether I should continue to be onstage,” Gyeongree noted. “I came out of the slump as I prepared for this solo record,” she said, adding that it gave her confidence in her ability to please the audience.

Her first single “Blue Moon” is a fast-beat song with experimental elements in its stage performance - such as male dancers in high heels and makeup.

“I was hesitant about whether I can take the risk and whether it would be acceptable to the public. But all in all, the stage performance turned out splendidly, and I am very grateful about that.”

Asked what she will be doing 10 years from now, Gyeongree said: “I will be nearing 40. I will either have completely left the K-pop scene or still be in the scene. In fact, I want to lead a life of variety.” Yonhap