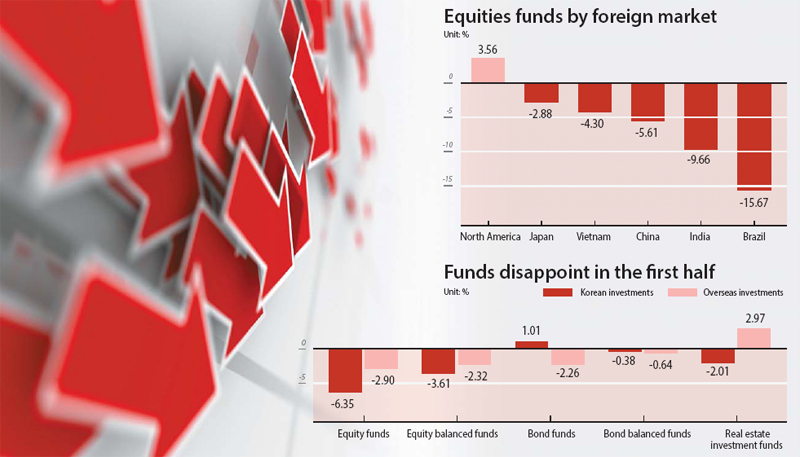 Korea investment funds have had a difficult 2018 so far. Regardless of what they invested in, most of them suffered heavy losses over the first half of the year. The culprit is obvious - the struggling Kospi, which as of Friday has fallen 6.8 percent since the beginning of this year.

Central banks around the world are raising interest rates, and the trade conflict between the United States and China is also affecting the fund market. Funds that are doing well are those focused on North American stock markets, overseas real estate and raw materials.

The falling Kospi was the biggest factor behind the falling bonds. The benchmark index started the year at 2,479.65, and by the end of the first half it stood at 2,326.13.

Funds investing in bonds reported a yield of 1.01 percent. This profit didn’t match the inflation rate, which was at 1.4 percent in the first half.

But funds invested in North American stocks rose by 3.56 percent, largely thanks to the bullish market in the United States. On the contrary, equity funds that invested in developing countries, including China, Vietnam and India, suffered losses that ranged from 4.3 percent to 9.66 percent. Raw material funds, which struggled for a while due to low crude oil prices, rose this year by an average 5.31 percent.

However, despite the dreary situation, one fund stood out. Korea Investment Management’s Kindex U.S. internet exchange-traded fund (ETF), which invests in U.S. internet companies leading in the fourth industrial revolution, reported a 24.37 percent yield in the first half. It was the only fund with a yield above 20 percent among funds that were older than six months and larger than 10 billion won.

Shim Jae-hwan, the head of Korea Investment Management’s ETF Division, which created the fund, said the factor that determines the success of an ETF fund is the area it invests in.

“We focused mainly on American internet companies that specialize in big data and artificial intelligence, even among fourth industrial revolution technologies,” Shim said.

The ETF fund picked 40 companies with internet-related businesses that accounted for 50 percent of their revenue.

“American internet companies are currently leading in fourth industrial revolution technologies, and only companies that have been investing continuously in data centers for more than 10 years have secured AI solutions,” Shim said. “Because the world’s digital data doubles every two years, the value of these companies has grown rapidly.”

However, there are many funds investing in U.S. IT companies, and their yields have usually been around 10 percent over the same period.

“For years, tech shares have led the U.S. stock market’s upswing,” Shim said. “At the center of that are the FANG companies. Even though the shares of these companies grew significantly last year, their increase shows no sign of stopping.”

As of Thursday, Netflix’s shares have risen 97 percent this year, while Amazon’s have risen 46 percent. Facebook, which was recently involved in a privacy controversy, has gone up by 14 percent.

Shim said that while the share values of these companies may seem as though they have already reached their limits, they can still keep growing as technology develops across the world.

“Additionally, we shouldn’t leave out the strength of these companies to diversify their businesses,” Shim said.

He said while Twitter is not a FANG company, the Korea Investment Management fund is investing in the social media company. Twitter’s value has risen more than 90 percent this year.

“[U.S. President] Donald Trump is an avid user of Twitter, and as such, Twitter use has increased. This led to the expansion of the company’s streaming advertisements,” Shim said.

He also said the bullish performance of the U.S. market has been a major contributor to the fund’s success. When asked about the prospects for world markets, however, Shim wasn’t optimistic.

“It looks as though President Trump is only focused on the future of the United States, and for the time being other markets will likely struggle,” Shim said.

Lee Kyung-min, the head of the market strategy team at Daishin Securities, said that funds investing in the Kospi 200 or the Kosdaq 150 indices will likely struggle in the second half of the year, and recommended that investors look for companies focused on the domestic market.

Lee Chai-won, CEO of Korea Investment Value Asset Management, said that many of the major companies listed on the Korean stock exchanges have high dependencies on the global market and are sensitive to external changes.