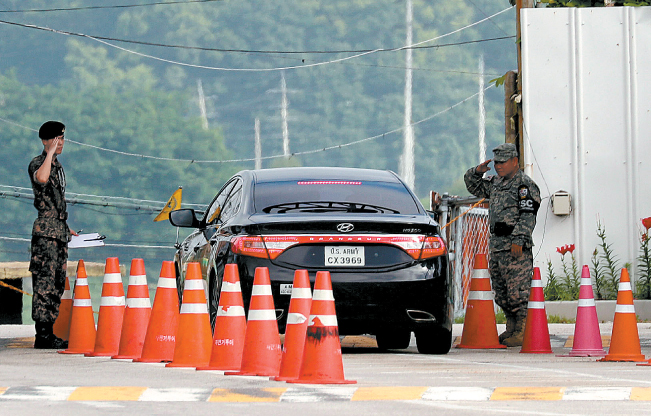 American and North Korean generals held a meeting in the border village Sunday to discuss the repatriation of remains of U.S. soldiers killed during the 1950-53 Korean War, following up on an agreement between the leaders of the two countries struck in Singapore last month.

While details of the meeting were not available as of press time, Major General Michael Minihan, the chief of staff for the U.S.-led United Nations Command (UNC) and United States Forces Korea (USFK) was thought to be at the negotiation table in Panmunjom. The general from the North’s Korean Peoples’ Army (KPA) was not identified.

It was the first time in more than nine years that the U.S. and North Korea held a meeting that involved negotiators of general-rank. The last such higher level meeting took place in March 2009.

A group of three USFK vehicles were seen driving towards the border village at 8:30 a.m. Sunday with the UNC flags. Sunday’s meeting took place after the North failed to show up to a meeting scheduled for last Thursday.

It is reported that the North was unhappy with the low rank of that meeting and wanted it upgraded to involve generals.

The North proposed to move the meeting to Sunday.

The return of the remains of American soldiers was agreed to during the June 12 North Korea-U.S. Singapore summit.

A four-point joint statement signed by Trump and Kim Jong-un reads: “The United States and the DPRK commit to recovering POW/MIA remains, including the immediate repatriation of those already identified.” DPRK is the acronym for North Korea’s official name, the Democratic People’s Republic of Korea.

According to Trump’s statement at a press conference after the summit, the issue of the return of the remains of American prisoners of war (POW) and soldiers missing in action (MIA) had not been on their agenda and was brought up at the last minute.

Trump called Kim “very gracious” in agreeing to their repatriation, and added, “So for the thousands and thousands - I guess way over 6,000 that we know of, in terms of the remains, they’ll be brought back.”

While details of the Sunday meeting are yet to be known, the two sides are expected to have discussed a date and protocol for the repatriation of remains through Panmunjom.

About 200 sets of remains are expected to be handed over to the UNC at the inter-Korean border.

The receiving will be handled by the UNC, not the U.S. or the South Korean military.

Some 21 nations fought alongside the South Korean military during the three-year conflict as part of UN multinational forces.

A scene of UNC soldiers receiving the remains could give some momentum to denuclearization by North Korea, while also earning Trump some political points back home.

In his latest remarks about Kim, Trump called him “very smart” and a “great personality” who was a “tough, good negotiator,” adding he got “along with him great,” in an interview with the UK publication Daily Mail published Saturday.

Trump pointed out that he took a “different approach” in dealing with the North and there “have been no missile tests, no nuclear tests” in the last nine months.

“There’s been no nothing.”

Pressed on criticism that he elevated a “ruthless dictator” on the global stage by agreeing to meet with him, he acknowledged that Kim was “ruthless, but so are others.”

“I mean, I could name plenty of others that we deal with that you don’t say the same thing about. I mean plenty of the people that I deal with are pretty ruthless people,” he noted.

Trump’s comments on Kim followed his tweet Thursday that he received “A very nice note from Chairman Kim of North Korea. Great progress being made!” referring to Kim’s letter delivered by U.S. Secretary of State Mike Pompeo, who paid a two-day visit to Pyongyang, his third visit this year, earlier this month.

Calling Trump “Your Excellency” five times, Kim said in the letter Trump’s “invariable trust and confidence” would be “further strengthened in the future process of taking practical actions.”