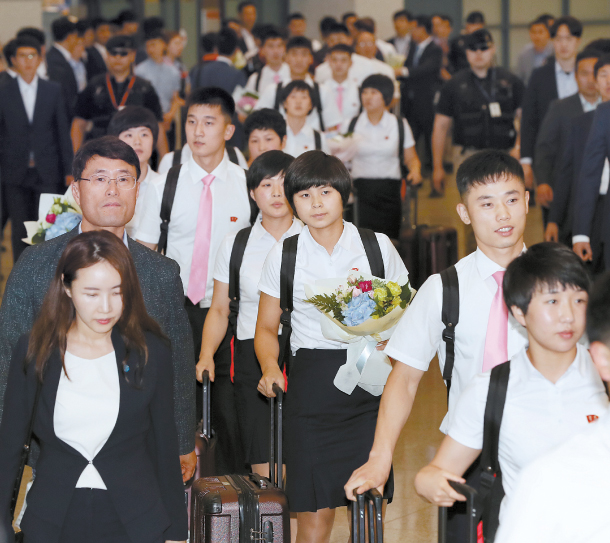 The two Koreas are fielding joint teams at an international table tennis competition in Daejeon that kicks off Tuesday, and the players start practicing together today, the Korea Table Tennis Association said.

The association announced Sunday the decision to field inter-Korean teams at the Seamaster 2018 International Table Tennis Federation (ITTF) World Tour Platinum Korea Open, which is slated to kick off Tuesday in Daejeon and run through July 22.

This is the third time the Koreas formed joint table tennis teams.

Some of the players in the ITTF Korea Open are teaming up again after just two months apart.

“I want to ask Song-i how she has been in the past two months, and also want to congratulate her for winning the women’s singles in the ITTF Pyongyang Open last month,” Suh Hyo-won told the JoongAng Ilbo on Sunday. “She jokes a lot and we’ve talked a lot before. I’ve always thought her defense skills are great, and I want to learn from her in that area. I think there will be lots to learn from each other.”

Suh and Kim won bronze together in the World Team Table Tennis Championships in Sweden in May.

Though North Korea sent its table tennis players to the South for the 2002 Asian Games in Busan and 2014 Asian Games in Incheon, this is the first time the North is participating in the ITTF Korea Open.

The 25-person North Korean delegation - which includes eight male players and eight female players - is scheduled to return to the North on July 23.