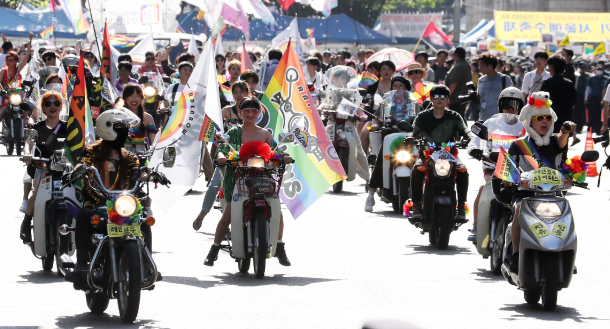 Participants in the 2018 Seoul Queer Culture Festival take part in a parade around central Seoul on Saturday led by the Rainbow Riders, an LGBT motorcycle club. The festival, which runs until July 22, is in its 19th year. According to its organizers, the parade grew from 50 participants in its first year to about 60,000 this year. [NEWS1]

More than a hundred thousand LGBT people and their supporters filled Seoul Plaza on Saturday to celebrate the 19th Seoul Queer Culture Festival, a record turnout according to its organizers. The festival runs from July 13 to 22 and this year, “Seoul” was added to its name because Daegu, Busan, Jeju, Jeonju and Incheon have hosted or are planning to host their own pride festivals this year.

Seoul’s festival had the theme “Queeround,” signifying that there are LGBT people all around us. According to its organizers, a record number of about 120,000 people took part in the festivities despite the sweltering heat, which reached a high of 33 degrees Celsius (91.4 degrees Fahrenheit). The Seoul police did not release an estimate of the crowd size.

Over 100 booths run by religious groups, parents of LGBT people, and student groups as well as the LGBTQ Youth Crisis Support Center greeted participants with rainbow flags, unicorn pins and fundraisers. LGBTQ stands for lesbian, gay, bisexual, transgender and queer, and queer is often used as an umbrella term for this community.

People used the festival as a platform to speak out against prejudice. The head of Parents and Families of LGBTAIQ People in Korea, who goes by the pseudonym Haneul, said that “[Their families] have proudly come out of the closet in the least queer inclusive country in the Organisation for Economic Co-operation and Development” and that they will “fight for legislation that will protect queer people.” The A in the acronym stands for asexual and the I for intersex.

“The widespread culture of hatred in Korea is not only targeting queer people but rather any group of oppressed people, including women, refugees and people with disabilities,” said Kang Myeong-jin, chief organizer of the Seoul Queer Culture Festival. “Some people want to erase these oppressed groups from society. But we cannot be erased. We are here and we need to be visible, and that’s what this festival is for.”

Although the festival was organized by Koreans, there was a significant foreign presence. Embassies of several countries including Canada, New Zealand, France, Germany, the Netherlands, Ireland, the United Kingdom and the United States showed support with booths.

Across the street from the plaza, religious groups gathered to protest the festival and LGBT people in general. About 500 police officers and 100 Seoul city officials were dispatched to prevent any serious conflicts between festival-goers and protesters. The protesters held signs saying homosexuality is a sin and lay down on the ground to block the Seoul Queer Parade, which was led by a motorcycle club called the Rainbow Riders.

When asked to speak about the opposing group, organizers said, “Faith should be for yourself, not for judging other people. They are only using religion as a means for violence. What we have here is not a discussion with two equal sides but a one-sided attack and some self-defense against it.”

On the progress of LGBT rights and future prospects in Korea, chief organizer Kang said, “Korean society may look stagnant because the opposition has the loudest voice, but society is continuously changing and we will eventually hear more voices calling for progress.”