The 2018 KBO season returns from the All-Star break today, with the ten teams preparing to fight to the bitter end for a spot in the postseason. But that’s not all there is to play for - if the season continues the way it has for the last few months, the top four teams are unlikely to change. This year’s baseball battle royale is all about the wildcard spot. 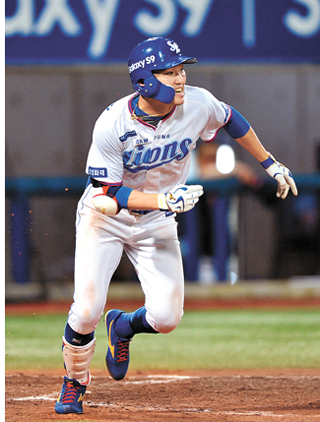 Park Hae-min of the Samsung Lions runs to first base after a hit at Pohang Baseball Stadium. [NEWS1]

Fifth place, the wildcard spot, is currently held by the Nexen Heroes with 46 wins and 46 losses. But the Heroes are by no means safe - there are only five games between the Heroes, the Kia Tigers, the Samsung Lions and the Lotte Giants.

Up until the All-Star break - officially the season’s halfway point, although by games played that milestone was actually about a month ago - the Bears have dominated. Though they failed to get their 60th win before the break, the Seoul team has an impressive 58 wins and 29 losses with a .667 win percentage.


The Eagles, Wyverns and Twins are essentially in a league of their own. There are only four games between them, meaning any one could take second place. Although all three are likely to make the postseason, what order they arrive in will probably not be determined until the end of the season. 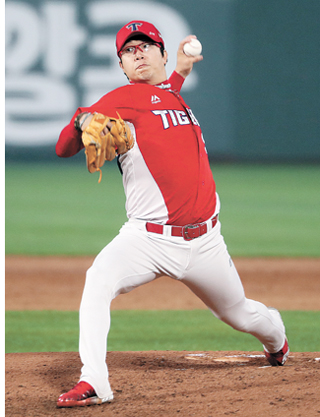 Yang Hyeon-jong of the Kia Tigers throws a pitch during a game against the Lotte Giants. [YONHAP]

Despite the absence of starting players due to injuries, the Heroes have managed to maintain their fifth place spot. The west Seoul team is expected to come back stronger as more injured players will return to the lineup.

The absence of the Heroes’ leadoff, 2017 rookie of the year Lee Jung-hoo, proved crucial - he had a batting average of .332 with 27 RBIs and four home runs in 59 games. Lee injured his shoulder while sliding during a game against the Bears on June 19. As Lee didn’t have to undergo surgery, the Heroes’ manager Jang Jung-seok expects him to return soon.

The sixth-place Tigers have a lot of questions to answer. The reigning champions dominated the season last year with incredible pitching and a strong batting lineup, going on to win the pennant, the championship and pretty much every individual player award going. This year it’s a very different story.

The Tigers’ first four pitchers in the rotation - Yang Hyeon-jong, Hector Noesi, Pat Dean and Im Gi-yeong - are not as threatening as they used to be. In the first half of the season the four have managed to pick up 57 wins. While Yang is maintaining his stride from last season, picking up nine wins and seven losses with a 3.48 ERA, Hector and Dean have noticeably dropped the ball. Im, who joined late this season due to shoulder surgery, has only picked up five wins with a 5.58 ERA. 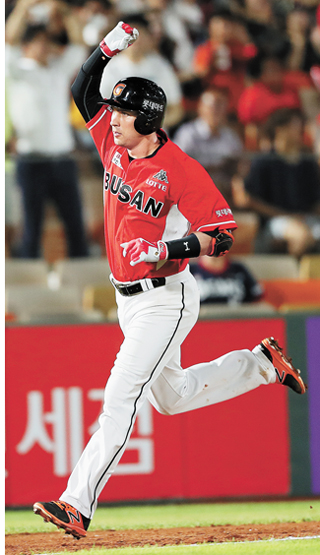 Andy Burns of the Lotte Giants runs the bases after hitting a home run at Sajik Baseball Stadium. [YONHAP]

But the batters are still solid. They’ve been averaging 5.71 runs per game, second in the league behind the Bears, and are third in batting average at .295. Considering the Tigers’ lineup is still incomplete due to injury, there’s very little criticism that can be leveled at the batters.

The Lions, who are five games behind the Heroes, also have a chance. The Lions finished the first half of the season with four straight wins led by its strong bullpen. This season, Sim Chang-min has played in 40 games as a bullpen pitcher and picked up four wins, four holds and 13 saves with a 2.20 ERA.

The Lions’ two foreign pitchers - Tim Adleman and Lisalverto Bonilla - barely picked up 10 wins combined. Although they’ve been getting better as the season goes on, they’re still inconsistent at best.

Luckily, the Lions’ batting lineup is starting to improve. The Lions’ table setters - Koo Ja-wook and Park Hae-min - managed to get their batting average above .300 before the All-Star break. In addition to batting average, Park’s base stealing average went up significantly in July to 90 percent.

Before the season began the Giants were the hot favorites to win the pennant this season. Unfortunately for the people of Busan that turned out to be nothing but hype, and the Giants are now tied with the Lions five games behind fifth place. The Giants entered the All-Star break with 37 wins, 47 losses and two draws.

The Giants have been struggling with the absence of catcher Kang Min-ho. Although the team has been rotating its young catchers to fill Kang’s spot, the pitchers seem to have lost their confidence on the mound.

Park Se-woong returned to the Giants in May but still hasn’t gotten back on form. Veteran closer Son Seung-lak has also added to the team’s woes with five blown saves this season.

In addition to the pitchers, the Giants have shown weakness in defense. In 2017 the team had the second lowest number of errors, at 76. This season, they will likely exceed that number - the Giants’ defense has already recorded 69 errors this season.

The KT Wiz and NC Dinos sit at the bottom of the table in ninth and tenth place. Despite some recent wins, neither team is likely to reach the postseason.