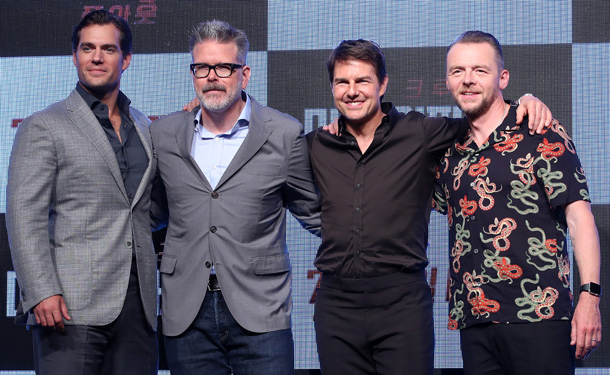 Hollywood star Tom Cruise and his “Mission Impossible - Fallout” co-stars Henry Cavill and Simon Pegg and director Christopher McQuarrie met with the press in Seoul on Monday to promote the new film.

The cast and director’s schedule included a press conference at the Lotte Hotel in southern Seoul, followed by a red-carpet ceremony on the first floor of the Lotte World Tower.

Cruise, visiting Korea for the ninth time, said, “I love the graciousness and elegance of your culture in Korea. The fans here just love movies. I love being here, and I was very excited to be here with my friends.”

When asked why he does his own stunts, Cruise replied, “For you. To entertain you.” He added, “It’s just a different feel to the movie when it’s real.”

During his final remarks, McQuarrie said, “I’ve never worked on a film where I’ve seen people work as hard and give as much of themselves to the movie - all the actors, the crew, everyone. I’m so very proud of this movie, and I can’t wait for everyone to see it.”

The sixth installment tells the story of Ethan Hunt (Cruise) and his Impossible Mission Force team, who race against time after a mission goes wrong.

The movie is scheduled to open in local theaters on July 25.

The three actors are scheduled to appear as special guests on an episode of the SBS variety program “Running Man,” which will air on July 22.