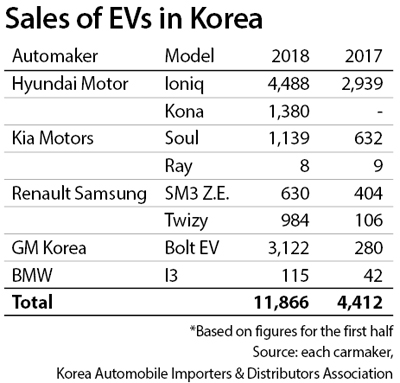 For years, Korea’s electric car market lagged behind that of other countries due to a lack of charging infrastructure and few appealing models.

This year marks a turning point, as sales of electric vehicles (EV) grew by more than 150 percent in the first half of 2018 when compared to 2017.

According to data from Korea’s four domestic carmakers and the Korea Automobile Importers & Distributors Association released on Sunday, 11,866 pure electric vehicles were sold from January to June this year. This is 168.9 percent more than the first half of last year, when 4,412 electric cars were sold in Korea.

Hyundai Motor sold 4,488 of its Ioniq Electric cars, making it the year’s most popular model. It was followed by GM Korea’s Bolt EV.

The Bolt EV launched in Korea last year, and GM Korea sold a total of 3,122 of the cars in the first half of this year.

The electric version of Hyundai Motor’s small Kona SUV, which only launched in May, took the third spot with 1,380 vehicles sold.

The top three EV models this year all have batteries that provide for long ranges.

The Ioniq Electric, the oldest of the three, can travel 200 kilometers (124 miles) per charge, a slight upgrade from its previous version, which ran out of juice after 191 kilometers.

GM Korea’s Bolt EV, a rising star in the Korean EV industry, can travel about 380 kilometers. The Kona Electric has the longest range of the top three at 400 kilometers.

According to Hyundai Motor, about 15,000 sales of the Kona EV have not yet been reflected in the data.

Renault Samsung Motors is aiming at a niche market with its electric cars. Its electric SM3 Z.E. sold 630 units in the first half. The Korean unit of French auto giant Renault Group is targeting taxi companies by providing an extra discount for SM3 Z.E.s sold as taxi vehicles.

It also launched a micro EV, the Twizy, last year, which sold 984 units so far this year.