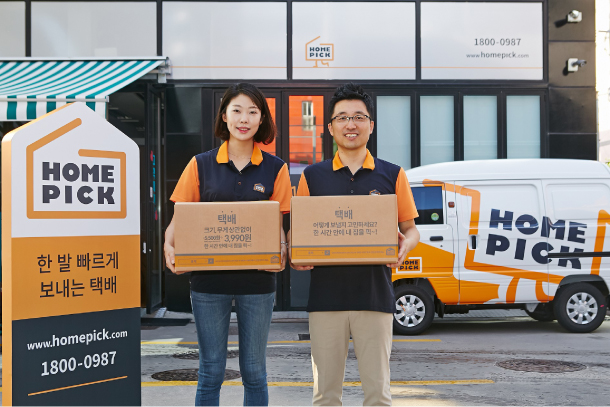 Kim Young-min, CEO of logistics start-up Zoomma, right, and an employee hold up parcels they collected from customers’ homes in front of a Homepick office within a GS Caltex gas station in Gangnam, southern Seoul on Monday. [SK ENERGY]

Just a month after Homepick launched in Seoul the service is getting ready to go national, the next step in an ambitious plan to improve parcel services while making use of wasted space on gas station forecourts.

The business is unique in the way it takes advantage of unused space in gas station forecourts. All Homepick offices are on the grounds of gas stations, making use of space that used to be wasted.

Homepick doesn’t need much space for its offices. One office, on the side of a GS Caltex gas station in Gangnam, southern Seoul, measures about five pyeong (117 square feet) and only contains racks to store parcels and a desk with a computer to print out invoices. But Zoomma CEO Kim Young-min thinks the compact space gives the company an advantage.

“Gas stations offer parking space for delivery trucks, they are everywhere in the country and they are also very noticeable, which makes it easier for delivery staff to find the station,” Kim from Zoomma said. “It’s also much cheaper to rent out a space from gas stations than getting a separate office especially in places like the posh Gangnam area where real estate prices are high.”

According to Kim, Homepick will open offices at about 600 SK and GS gas stations nationwide by August to offer door-to-door parcel delivery across the country.

The service, which started in June, is currently only available in the greater Seoul area including Gyeonggi and Incheon.

“It’s a win-win for both the logistics companies and gas station operators,” said SK Energy’s network business development team leader Lee Myung-hee during a press briefing Monday. “Gas station operators earn on average 2.5 million to 3 million won a month in profit, which is not much. Renting out idle space will help them earn about one third of that in extra income.”

Currently, the oil refiners are offering four to five-pyeong spaces at their gas stations at small rental fees. Zoomma staff collect parcels from homes located within a 3-kilometer radius of each gas station and store them in the office until CJ Logistics staff pick up consignments of parcels to move to final destinations.

The proximity of the warehouses - or in this case gas stations - allows Zoomma staff to pick up parcels within an hour of customers placing orders. Customers can even reserve the desired time of pick-up.

Also, unlike at post offices or convenience stores where delivery fees vary by size and weight, Homepick offers a single price tag of 5,500 won, making it convenient to send large parcels of up to 20 kilograms.

Heavy parcels would typically cost around 7,000 to 8000 won even if customers took them to post offices themselves. Currently, the service is offered at 3,990 won as part of a promotional launch event.

Zoomma hopes to reap 60 billion won in revenue in its first year of service by handling 12 million parcels a year.

The company hopes to grow to a size where it is able to handle 60 million parcels and earn 330 billion won in revenue by its third year. To reach that third year target, Kim said the start-up would have to hire about 5,000 pick-up drivers. Currently, it has about 150.

The business model was inspired by SK Group Chairman Chey Tae-won’s order to open up all assets and business infrastructure of SK affiliates to create more social value, according to SK Energy.

GS joined despite being a competitor in the oil refining market as its chairman also shared Chey’s vision, according to GS team leader Kim Nam-joong.

As GS also has GS Home Shopping, which depends heavily on a logistics service, and convenience store chain GS25 that already offers parcel delivery services, the group hopes to create synergies between businesses by utilizing gas stations as warehouses.