‘Ant-Man’ continues its dominance at the multiplex

‘Ant-Man’ continues its dominance at the multiplex 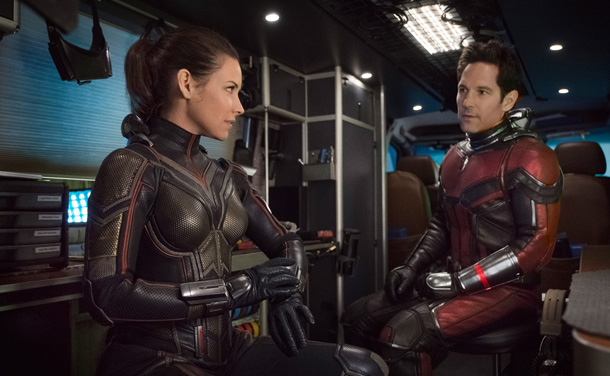 Walt Disney and Marvel’s “Ant-Man and the Wasp” maintained the top spot in the Korean box office in its second weekend. [WALT DISNEY COMPANY KOREA]

Walt Disney and Marvel’s “Ant-Man and the Wasp” held on to the No. 1 spot in its second weekend, while local mystery action flick “The Witch: Part 1. The Subversion” was pushed down by Dwayne Johnson’s new action flick “Skyscraper” to third.

“Ant-Man and the Wasp,” which focuses on a family man who becomes a size-shifting superhero, sold 1.06 million tickets from Friday to Sunday, making up 46.2 percent of all ticket sales.

Since its release on July 4, “Ant-Man and the Wasp” has been seen by 4.38 million people, which far exceeds the 2.84 million tickets sold by its prequel “Ant-Man,” released three years ago.

At a distant second was “Skyscraper,” Johnson’s hostages-and-high-rise action spectacle.

The action-packed film tells the story of Sawyer (Johnson) who is hired as a security consultant by a wealthy Hong Kong businessman to certify his new skyscraper. It had 465,000 admissions from Friday to Sunday, accounting for 20.3 percent of the weekend ticket sales.

Director Park Hoon-jung’s “The Witch” fell to the third spot from last weekend’s second place, selling 387,000 tickets. The supernatural thriller sold a total 2.48 million tickets since its release on June 27.

The local horror movie “The Whispering” came in at fourth place in its first weekend, selling 162,000 admissions.

The film is a bone-chilling tale of six high school students who head to a haunted house where they hear mysterious whispers. Once there, the friends start to go missing one by one.

The Korean coming-of-age drama “Sunset in My Hometown” rounded out the top five, sliding two spots from last weekend.

The film, which is about a struggling rapper who refuses to mend his relationship with his gangster father, sold 64,000 tickets in its second weekend.

Next weekend, “Ant-Man” may be overpowered by another Walt Disney release, “Incredibles 2,” which comes out in Korea on Wednesday. The Pixar film is a sequel to “The Incredibles,” released in 2004, and dominated the North American box office last month.