Moon orders military to show him all martial law documents

Moon orders military to show him all martial law documents 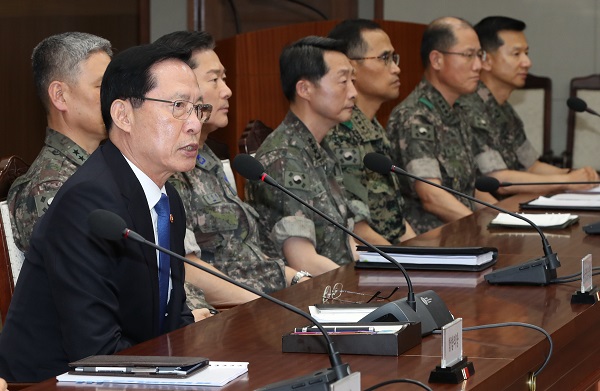 Defense Minister Song Young-moo, left, presides over an emergency meeting with commanders in the Defense Ministry in Yongsan, central Seoul, on Monday as President Moon Jae-in ordered the military to submit to him personally all documents related to a martial law plan drafted in March 2017. [YONHAP]

President Moon Jae-in on Monday ordered the military to submit to him personally all documents related to a martial law plan drafted in March 2017, a contingency plan in case the Constitutional Court rejected the impeachment of President Park Geun-hye and chaos broke out in Korea’s streets.

In a sign of how gravely the president views the case, Moon demanded an immediate report of all related materials to him without any timetable for his review of them.

“While the Defense Ministry’s special investigation team will be conducting a thorough probe, it is required for the president, as commander in chief, to know what really transpired and to what extent the contents of the martial law document had been put into actual action,” Moon was quoted as saying by Blue House Spokesman Kim Eui-kyeom.

The documents subject to be surrendered to Moon are those exchanged among the Defense Ministry, the Defense Security Command (DSC), the Army, the Army Special Warfare Command and submilitary units in the days leading up to the drafting of the nine-page martial law plan report entitled “Wartime Martial Law and Joint Action Plan.”

The martial law plan was drafted by the DSC just days before the Constitutional Court’s March 10 ruling that ousted former President Park from office for breach of trust, abuse of power and corruption.
Park is jailed while appealing a 24-year prison sentence.

Moon’s demand for all relevant documents illustrates how seriously the former student activist who protested against past military governments is viewing the idea of the drafting of martial law plans. The ruling Democratic Party contends the report is tantamount to a treasonous act.

“The document states the scale and location of military mobilization in details. Therefore the president needs to confirm if those words were actually put into action and if there were many stages of action to implement it [by poring over all relevant documents],” said a senior presidential official, who asked not to be named.

In the nine-page report, the DSC detailed options for declaring martial law if the court ruled against Park’s removal and angry mobs poured into the streets. It said that martial law would be necessary if the functioning of the three branches of government became paralyzed due to social instability caused by violent protests, “therefore making it necessary to end the social unrest at an early stage” by the military.

It also laid out options that would allow the military to open fire on protesters, which were if military forces were attacked by mobs or if there were no other means to bring protesters under control.

Moon’s order came amid questions being raised about the behavior of Defense Minister Song Young-moo, who learned of the martial law document on March 16.

The martial law plan was publicized by Rep. Rhee Cheol-hee of the Democratic Party on July 5, more than three months after the defense chief learned of it.

In his first public response, Song acknowledged he kept the plan from the public and the Blue House because he deemed “political considerations” had to be taken into account.

“I was reported about the document by the DSC chief on March 16. I judged that we need to have a legal analysis into it, while at the same time a political consideration was required to decide whether it should be made public or not,” said the defense chief in a statement Monday.

Moon’s Chief of Staff Im Jong-seok and Cho Kuk, the senior civil affairs secretary, were at the April 30 meeting.
“I briefly mentioned the existence of the martial law document and problems it entails as one example of the DSC meddling in domestic politics during the discussion,” said Song. But the issue was not discussed in detail.

“I judged it was important to establish favorable conditions for the inter-Korean summit and continue a positive atmosphere created by the successful hosting of the Winter Olympics and Paralympics,” explained the minister.

Song also noted he decided to keep it undisclosed because he worried the document could be used for political purposes ahead of the June 13 local elections.

Critics of Song say it wasn’t his job to judge “political considerations.”
“I accept the concerns of the people with a heavy heart that the military’s probe into the issue wasn’t carried out in a timely manner. I will faithfully carry out President Moon’s special order,” the defense chief said.

The martial law plan was reported to the presidential office on June 28, 105 days after Song was briefed on it.
An inaccurate account by the Defense Ministry over the martial law report has added to questions about the defense chief. The ministry, at first, said it had outside legal experts review the report for legal analysis, which turned out to be false.

Song could be questioned by the military’s special investigation team looking into the martial law plans, which began its official work Monday.