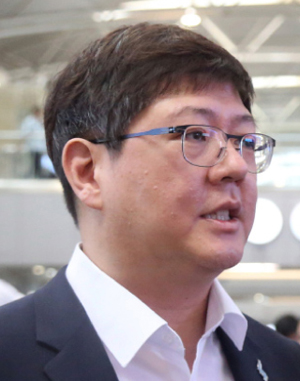 Members of a South Korean nongovernmental organization led by the youngest son of late President Kim Dae-jung began a four-day trip to North Korea on Monday to discuss expanding civilian exchanges between the two countries, including a joint project to repatriate the remains of Koreans forced into labor by the Japanese during colonial rule.

Kim Hong-gul, chair of the Korean Council for Reconciliation and Cooperation, a Seoul-based association of pro-unification civic groups founded in 1998, led the five-member team to Pyongyang on Monday. They departed from the Beijing Capital International Airport on North Korea’s flag carrier, Air Koryo.

The Ministry of Unification, which handles relations with North Korea, approved the trip last week. The group’s North Korean counterpart, the Council for Reconciliation and Cooperation, had invited them.

“This trip was conceived in order to build on the atmosphere created by the April 27 declaration between the South and North’s leaders,” Kim Hong-gul said in a statement released by the organization on Monday.

In a declaration signed by South Korean President Moon Jae-in and North Korean leader Kim Jong-un after their summit in April, the two agreed to “encourage more active cooperation, exchanges, visits and contacts at all levels to restore a sense of national reconciliation and unity.”

The two sides plan to discuss an inter-Korean project to recover and repatriate the remains of Koreans forced into labor by the Japanese during its rule over the peninsula. They also plan to discuss a cross-border communication office to expand civilian and cultural exchanges and an inter-Korean center to build the foundation for peaceful unification, the South Korean council said.

Kim Hong-gul added that he hopes the two councils can hold a more formal meeting at an “early date” to help boost inter-Korean civilian cooperation and plans to propose a joint event involving the two groups in October.

“There seemed to be a possibility of resolving the issue of repatriating the remains of Koreans forced into labor by the Japanese, so we asked the North this year, ‘Why don’t we try to do this together?’” Kim Hong-gul told reporters in Beijing on Sunday ahead of the trip. This resulted in their invitation to Pyongyang, and he added that a considerable amount had already been discussed and that they would come to a formal agreement during their visit to Pyongyang.

The South Korean council estimates that the remains of about 2,200 Koreans are buried in shrines and other locations in Japan.

Kim Hong-gul added that he envisions creating a memorial for the remains of Koreans who were without family at a peace park in the demilitarized zone, where “South and North Koreans can jointly pay respects.”